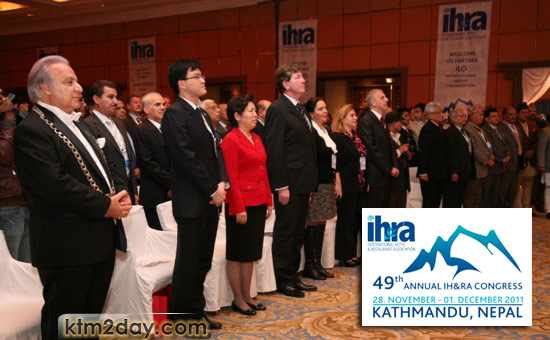 Hospitality leaders from around the world converged here on Monday to participate at the 49th International Hotel and Restaurants Association (IH&RA) World Congress for the interest of all hoteliers’ worldwide. The event is being held in Nepal after almost 27 years.

President Ram Baran Yadav inaugurated the three-day event that is expected to make wider impact on the burgeoning tourism sector of the country and facilitate the interest and rights of tourism entrepreneurs around the world.

President Yadav hoped that the event would help Nepal be recognised across the globe and disseminate a positive message to world travellers. “As the government has accorded high priority for the tourism sector under Public Private Partnership (PPP), such an event would boost confidence of the Nepali hospitality sector.”

Minster for Tourism and Civil Aviation Lokendra Bista Magar said under PPP, the government has adopted a liberal policy for the development of the tourism sector and facilitate tourism entrepreneurs. “Development of infrastructure is also in high priority of the government.”

IH&RA President Ghassan Aidi said the hospitality sector can make a huge contribution to overcome the economic crisis by attracting capital investment. According to Aidi, around 10 hotels are opened across the globe everyday and each new hotel is provides employment to 100 individuals.

Focusing on several issues affecting the hospitality sector, Aidi added that climate change is one of the issues severely affecting the sector. “It’s time to act for the betterment and sustainable development of the tourism sector, and together we can do it.”

HAN president Prasidha Bahadur Panday said the World Congress will help Nepal to promote itself in the international arena and will also motivate international investors to inject investments here.

Although the government estimates show that the tourism sector contributes around 3 percent to the country’s GDP, HAN says the sector’s contribution stands at as high as 17 percent.

“It is important to acknowledge that tourism is not an isolated industry, but works hand-in-hand with many other small- and large-scale enterprises as well as large scale industries,” said Panday. More than 180 delegates from 30 countries are participating at the congress.

According to HAN, it won the international bid to host the congress during its previous edition held in Lausasnne, Switzerland, in January 2010. (Source: ekantipur)