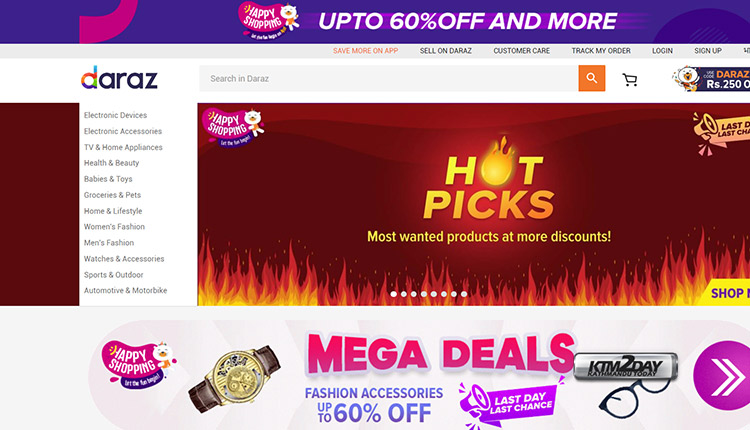 The Department of Commerce, Supplies and Consumer Protection Management has decided to go ahead and slap a fine of Rs 300,000 on e-commerce firm, Daraz after reviewing the company’s petition on its action.

Netra Prasad Subedi, director general at the department said that after a meeting on Sunday, the department decided to approve the fine on the company. “We previously took action against Daraz after finding the fault of the company,” he told the Post.

Under the law, the company has the right to ask for a review of the action taken.

According to Subedi, the department called Daraz to take their statement during the review period.

He said his department will now be sending Daraz a formal letter regarding the fine being imposed on it.

On February 3, the department decided to penalize the online seller Rs300,000 under the Consumer Protection Act 2018 on the basis of complaints regarding delivery of a Force watch, instead of the ordered Mini Focus watch and also of delivering a portable hard disk with a broken cover on November 7.

Daraz then wrote to the department asking for a review of its decision.

Prem Lal Maharjan, president at Forum for Protection of Consumer Rights said that they welcome the decision made by the department. “The company deserves strict action. They have been cheating many customers,” he said.

Daraz issued a statement on February 4 following the department’s decision to slap a fine on it.

“The decision has been made without allowing Daraz to internally investigate or amicably resolve the issue. Lack of disclosure, transparency, and the unusual publicity of these unfortunate and rare incidents have raised a question whether they have been deliberately orchestrated to defame the company,” it said at the time.

The department said it launched an investigation after receiving the complaint. It first conducted an inspection at Daraz’s office in Naxal and then studied the documents before starting an investigation.

“As the country does not have proper laws regulating e-commerce, the online business needs to be dismissed unless the law is made,” Maharjan said.

He said the slapping a fine is not going to be sufficient. “There are no governing bodies looking after the e-commerce businesses due to which there are a huge number of fraud victims of online shopping portals.”

The Forum had also said that they will move the court, if the Department of Commerce fails to take appropriate action against Daraz for wrong item delivery.

Similarly, the department wrote a letter to the Department of Industry to conduct an inspection of the company to find out whether it is operating according to its registered objectives or not.

Consumer rights activists argue that when an online seller acts as a middleman, it should assume responsibility for the quality, price and quantity. The Consumer Protection Act 2018 also states that any service-oriented company should accept liability.

However, Daraz maintains that it is a marketplace for buyers and sellers, and is not responsible or liable for the actions, products and contents.

The Post tried to reach Daraz for a response, but they were unreachable.

A lack of specific provisions in the law to address the roles and responsibilities of online marketplaces has meant that these companies are not accountable to anyone, despite making money as middle-men, say consumer rights activists. Sellers too are using the lack of governing laws to cheat customers through false advertising and price markups, they added.