Samsung smartphone from the mid-range category debuted last month with the first of A-Series devices , the Galaxy A30 and Galaxy A50 which is now readily available in the Nepali market.

Samsung is now set to launch few other smartphones from the A-Series soon, targeting the lower budget market with the new Galaxy A10.

The Galaxy A10 is the most younger sibling from the Galaxy A-Series family and has a good build quality when compared to M-Series devices.

Check this out : Samsung Galaxy A10s Launched In Nepali Market

The A10 is the most affordable smartphone out of three A-Series smartphones launched till date . It comes with a 6.2 inch HD+ Infinity V-Display and has a resolution of 720×1520 pixels with IPS LCD screen with 271 ppi density.

The device sports an Exynos 7884(underclocked version of Exynos 7885) octa-core processor which runs at 2 cores at 1.6 GHz and 6 cores at 1.35 GHz speeds coupled with a Mali-G71 MP2 graphics processor unit.

The dual-SIM (Nano) Samsung Galaxy A10 runs Android 9.0 Pie with One UI on top. The Galaxy A10 will be offered in Red, Blue, and Black colour options. 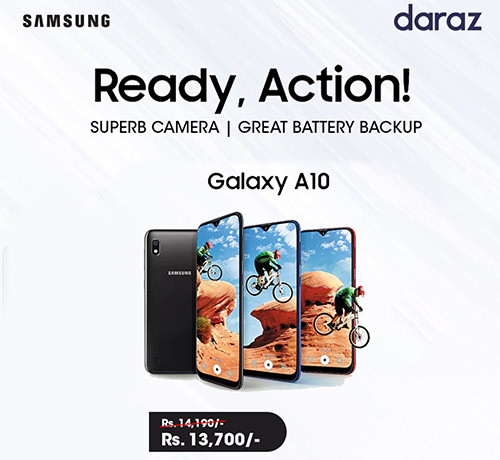 Samsung Galaxy A10 Price in Nepal