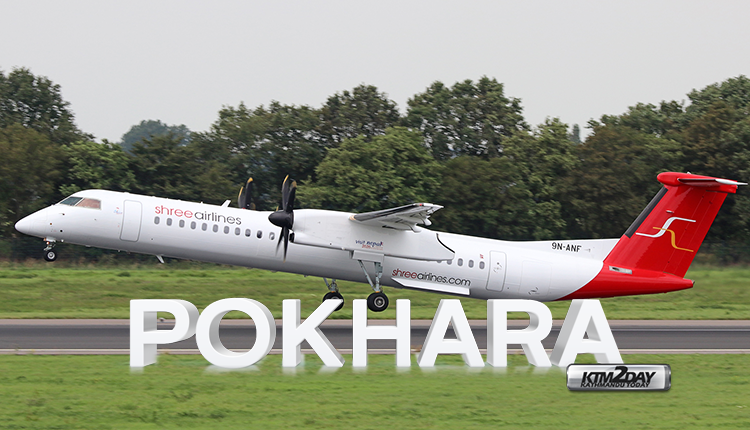 Shree Airlines has started its commercial flights on Kathmandu-Pokhara route from today.

With its Dash-8 aircraft, the airline will operate two flights a day in this route. As an introductory rate, the company has fixed one-way ticket from Kathmandu to Pokhara at Rs 2,000 and oneway ticket for Pokhara to Kathmandu has been set at Rs 2,600.

According to Anil Manandhar, corporate head of the airline company, the airfare is subject to change in the future depending on the season. “However, our airfare will be comparatively affordable for passengers and equally competitive with other airline companies,” he assured.

He further added that the company expects flight operation in Kathmandu-Pokhara sector to benefit passengers with safe, short and cheaper flights. Moreover, the flight will surely help to contribute in the national Visit Nepal 2020 campaign, he added.

The flight duration between Tribhuvan International Airport and Pokhara Airport is around 20 minutes.

As the Dash-8 series aircraft is comparatively speedier and can also carry more number of passengers, this kind of aircraft can be useful for the management of traffic congestion as well, opined Captain Bharat Singh Thapa, who flew Shree Airlines’ maiden Kathmandu-Pokhara flight this morning.

“This plane can carry 80 passengers at a time, which means two 42-seater aircraft can be replaced with one aircraft,” he explained.

He further claimed that the aircraft can land smoothly even on short runways.

Currently, the Pokhara Domestic Airport has 1,400-metre-long runway, with around 50 daily flights being operated from the airport.

Shree Airlines plans to operate five daily flights in the Kathmandu-Pokhara sector in the future.

As per Manandhar, the company is preparing to add more aircraft to its fleet to expand its services. “We are preparing to add three more Dash-8 series aircraft. Thereafter we will operate five flights a day on the Kathmandu-Pokhara route,” he said. “We will submit the proposal to both the Civil Aviation Authority of Nepal and the Ministry of Culture, Tourism and Civil Aviation for permission to bring new aircraft after completing our preparations.”