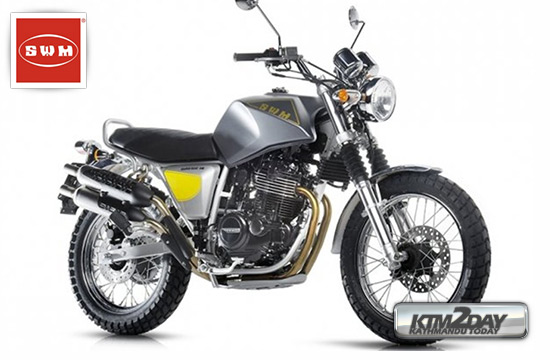 With Nepal’s biggest automobile exhibition, the NADA Auto Show 2018, right round the corner, automobile dealers are revving up to showcase and launch new models.

Gyan Earthmovers, the authorised distributor of SWM, an Italian bike brand, will be officially launching SWM motorcycles for the first time in the country at NADA Auto Show 2018. The company will be launching three models: Silver Vase, RS 300 R and Super Dual 650.

SV.VM (Sironi Vergani Vimercate Milano) was founded in 1971 by Piero Sironi and Fausto Vergani and was based in Milan, Italy. They started with small capacity Sachs engined enduro bikes and began making Rotax engined trials bikes in 1977. Making the announcement during EICMA 2014 show in Milan, SWM are back on the market by introducing six street and off-road bikes with engine size between 300 and 650cc.

The Silver Vast is SWM’s take on the classic scrambler while the RS 300 R will be targeted at enduro riders. The biggest bike in SWM’s Nepal debut will be the Super Dual 650, an adventure tourer.

According to Dipesh Shrestha, director at SWM Motorcycles in Nepal, SWM bikes have racing DNA in their makeup and will offer rock solid performance and durability. Prices of SWM bikes are expected to start from Rs1.4 million all the way to Rs2.3 million, said Shrestha.