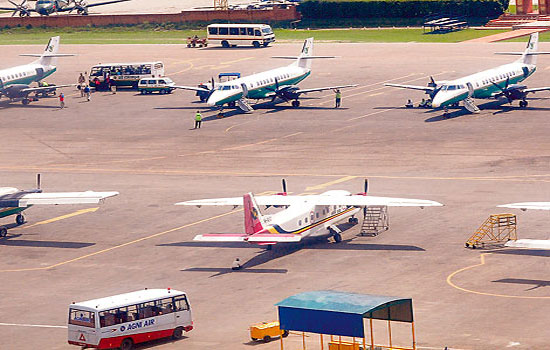 The TIA stats shows domestic aircraft movement dropped 0.85 percent in 2011 compared to the previous year. There were 79,188 flights operated in 2011 as against 79,874 flights in 2010. Eight domestic airlines and five helicopter services currently operate from Kathmandu.

Airlines have blamed the drop in passengers’ movement to airfare hike. Private air operators had hiked fuel surcharge twice in 2010 and they increased the airfare by 13-48 percent depending on the routes in 2011. In last two years, airfare has become dearer by more than Rs 1,350 in the long-haul routes and Rs 450 in the short-haul sectors.

Amongst the domestic air operators, Buddha Air maintained its lead flying more passengers in 2011occupying a share of 43.63 percent.

Buddha Air’s fleet expansion drive has allowed it to consolidate its market share in domestic aviation. Addition of an ATR 72 aircraft has helped Buddha to increase its share to 43.63 percent from 39.59 percent of 2010.

According to TIA, Buddha, Agni Air and Sita Air were the only domestic airlines to post a growth in passenger movement in 2011.

Yeti Airlines was the second largest domestic carrier with 449,460 passengers. However, it suffered a drop of six percent in the passenger occupancy in 2011.

Same is the case with its subsidiary, Tara Air whose passenger occupancy also dropped by 24.22 percent to 78,222 in last year. Tara Air that started operations in June 2009 and flies on short-haul routes had carried 103,224 passengers in 2010.