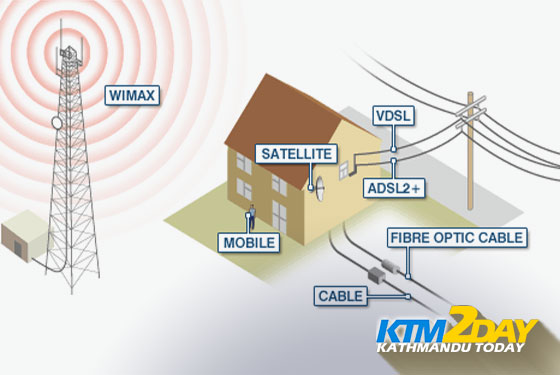 The government is unveiling the much awaited Broadband Policy within one and half months.

The Ministry of Information and Communications (MoIC) has already directed Nepal Telecommunications Authority (NTA) – the telecom sector regulator — finalize the draft as per the format provided by it.

“The draft will be endorsed within 45 days. We have already asked NTA to fianalize it soon,” Suman Prasad Sharma, secretary of MoIC, said.

According to Sharma, the policy will define broadband, identify the minimum uplink and downlink speed in Kbps, guarantee the quality of service provided both on shared as well as dedicated connections offered by the service providers.

Though the term ´broadband´ is being used in Nepal for almost two decades, it has not been defined in the context of Nepal.

As per the draft policy, operators will have to provide minimum upload and download speed of 128 Kbps and 256 Kbps, respectively, in order to name themselves as broadband service providers. The speed, however, should not be on shared basis.

NTA has hired Manohar Bhattarai as the consultant to prepare the policy.

Though NTA had prepared initial draft of the policy back in 2008, it is yet to see the light of the day.

Earlier in May, MoIC had directed NTA to sumit the final draft policy within a month. But NTA failed to submit the draft within the given timeframe.

Anada Raj Khanal, director at NTA, said they would prepare the draft as per the format provided by MoIC and forward it to the ministry for approval.

The broadband policy is expected to give pace to development of broadband technology so that the various online services are delivered to people with great ease. People can thus rely on e-health, e-education and e-commerce services without any doubt once the speed is fixed and the quality is assured.

The Broadband Policy, if endorsed, will play an important role in the development of information, communication and technology sector. This policy will also help the existing service providers to fix their speed and also allows new companies to enter into the market. This will help in the overall development of broadband business in Nepal and also benefit the end users as they can be assured of the speed and quality.