Nepal Airlines all set to restart flights to China, UAE 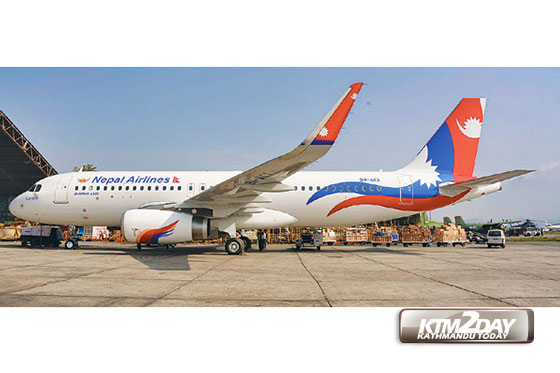 With two new Airbus A320s in place, the Nepal Airlines Corporation is now working to restart its operations in the previously discontinued routes. The national flag carrier is all set to resume its flights to China and the United Arab Emirates (UAE).

NAC Spokesperson Ram Hari Sharma said that they would be connecting Kathmandu with Guangzhou, the third largest city in South Central China.

Earlier, NAC used to fly to Shanghai but was forced to suspend the route due to a lack of aircraft in 2008. According to NAC, it is also preparing to resume flights to Dubai sector after a three-year gap.

“We are preparing to appoint the general sales agent in Guangzhou after the NAC board approves the management plan,” said Sharma.

The NAC’s plan to increase the number of destinations has been prompted by the arrival of the second of the two Airbus A320 jets. The aircraft—named Lumbini—landed on Tribhuvan International Airport on May 1. With the announcement of two routes, NAC said its international route would increase to seven.

Increasing its outreach in China makes sense for the corporation since China is poised to overtake India as the top tourist market segment for Nepal soon, largely due to increased airline connectivity and China’s changing policy towards Nepal.

According to preliminary data from the Tourism Ministry, Nepal received 123,805 Chinese visitors in 2014, up 10 percent year-on-year. Even as demands for flight seats to Nepal have increased exponentially in China, the NAC has been unable to meet them because of lack of aircraft.

Currently, four Chinese carriers—Air China, China Eastern, China Southern and Sichuan Airlines—connect the mainland China with Nepal. Meanwhile, the corporation also said that it is preparing to operate daily flights on the Kathmandu-Delhi sector soon. “Currently, we are in the process of clearing the custom tax of the new Airbus. As soon as the works is completed, we would operate daily flights on the Kathmandu-Delhi,” said Sharma.

Over the last decade, the number of international destinations have been slashed from 21 to four, reflecting the spreading malaise within the carrier. The national career, in its heydays, used to fly to Amsterdam, Colombo, Dhaka, Frankfurt, Karachi, London, Osaka, Paris, Shanghai, Singapore and Vienna, besides five Indian cities— Bangalore, Delhi, Kolkata, Mumbai and Patna—it presently connects Kathmandu with Doha, Kuala Lumpur, Hong Kong and Bangkok.

Similarly, to deal with the shortfall of pilots licensed to fly the Airbus, the corporation issued notice to temporarily hire 10 flying crews, including five senior captains, on Tuesday. According to sources, NAC has decided to hire the pilots and would pay market rates, ranging from $12,000 to $15,000 per month, to the selected ones.

“We don’t have the alternative of paying them the hefty amount,” said the source. The national flag bearer has hired two instructor pilots from Germany and the Airbus Company. At present, they are training four Nepali pilots to fly the planes.

Additionally, it has also dispatched 14 pilots for Airbus training in France.

The NAC is yet to set the launch dates for any of these routes, but has said that flights on these proposed sectors would begin after two months.