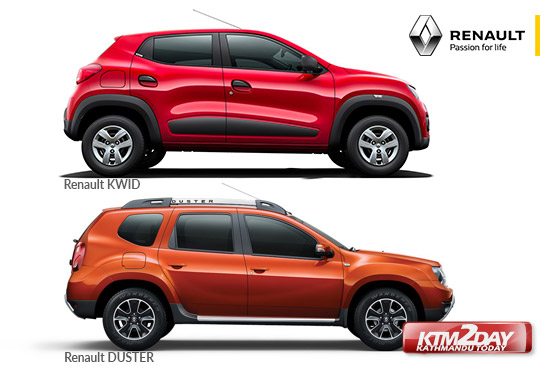 The French multinational automotive company Renault is planning to make its first official foray into Nepal with the launch of two of its brands Duster and Kwid next week.

The automaker has appointed Advanced Automobile Pvt Ltd as its authorized distributor for Nepal.

The company has scheduled the announcement of its official entry into Nepal and the launch of Duster and Kwid for Monday next week.

“We are excited to launch Renault vehicles in Nepal. We are overwhelmed by the response from potential customers in Nepal toward the brand,” Sandeep Chhetri, the marketing manager for Advanced Automobile Pvt Ltd, said.

Chhetri, who says Renault enjoys around 30 percent share of the Indian automobile market, adds: “We have been receiving nice bookings. We are optimistic of creating a good position in the Nepali automobile market.”

Chhetri says both Duster and Kwid vehicles are feature-equipped as well as affordable and suit Nepali roads.

The Kwid, which will be available in a petrol variant in Nepal, is powered by a 799cc three-cylinder engine that generates 54PS power at a maximum 5,678 rpm and 72Nm of torque at 4,386 rpm. Officials of the company say Kwid will have a mileage of around 20 km/liter in Nepali roads. The safety features on Kwid include remote keyless-entry, front fog-lamps, engine immobilizer, driver-side airbags and seat belts for front and rear passengers, among others.

The Duster, on the other hand, is available in both petrol and diesel variants. While the petrol variant of Duster has a 1.6 liter petrol engine paired to a five-speed manual gearbox, the later is powered by a 1.5 liter diesel engine.