Ford Nepal has launched the latest version of its compact sedan, 2018 Ford Aspire facelift in Nepali market. The company claims the new Ford Aspire to have a completely redesigned exterior and cabin design. Ford dealerships across the country have already started accepting booking for the same at a minimal amount . The new Ford Aspire will not be an extension of the Figo hatchback but will have a unique design of its own. The Aspire will also feature a floating dashtop infotainment system, 6 airbags and other premium features.

As per the official images revealed on the company’s website, the new 2018 Ford Aspire facelift gets an updated front grille and restyled front bumper. Inside the cabin, the car will have same dual-tone black-beige colour. The infotainment system in the new Aspire will also get Ford’s SYNC 3 that supports Apple CarPlay and Android Auto.

The facelifted Ford Aspire comes with a new face sporting a honeycomb pattern chrome grille, with revised headlamps cluster and a new front bumper with a handlebar-moustache-like black design element housing the central airdam, round foglamps and C-shaped chrome elements on either end. 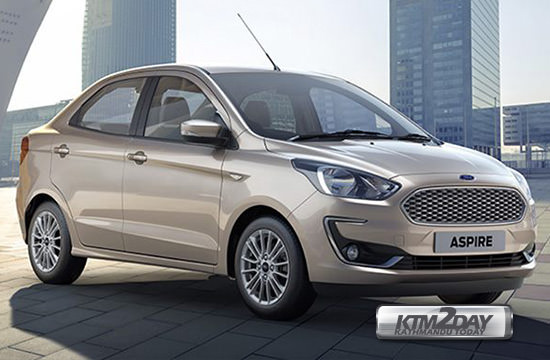 The Ford Aspire facelift will also get a new petrol engine, namely the new 1.2-litre, a three-cylinder unit from the carmaker’s Dragon series that currently powers the Ford Freestyle. The 1194 cc motor is capable of churning out about 95 bhp at 6500 rpm and develops 120 Nm of peak torque at 4200 rpm.

The diesel variant will continue to come with the tried and tested 1.5-litre TDCI engine that powered pre-facelift model. The 1498 cc, four-cylinder oil burner makes 99 bhp at 3750 rpm and develops 215 Nm of peak torque between 1750 to 3000 rpm.

Transmission duties for the facelifted Ford Aspire will be taken care of by a 5-speed manual gearbox, for both petrol and diesel options. However, we are yet to know if Ford will be offering an automatic option as well, which is likely to be the new torque converter that does duty in the EcoSport.