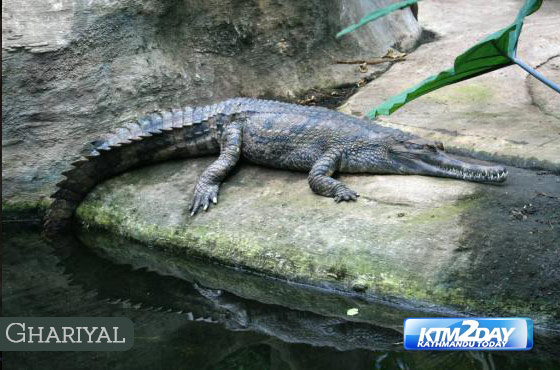 For finding out status and better conservation of Gharials, the government has started counting and monitoring of endangered gharials from the Chitwan National Park (CNP).

The monitoring process began on Friday in Rapti and Narayani rivers that flow alongside the national park. These two rivers have been the major habitat of Gharial, a fish-eating crocodile in the country.

The monitoring study is aimed at finding status of gharials in the river, which will ultimately contribute in conservation efforts of these reptiles, according to Bed Bahadur Khadka, Assistant Chief Conservation Officer with the CNP.

“We have begun monitoring to know the number of the gharials. Besides, we will also gather information on their location and nature of their habitat, including their population in these two rivers,” said Khadka, adding, “The outcome of the study will show their condition, show what should be done to protect them, and guide us in designing future conservation plans accordingly.”

For accurate counting of gharials, these two major rivers and other small streams have been divided into total 11 segments.

Likewise, a total of 11 groups of field technicians—3 in Rapti, 8 in Narayani and one for Dhungre and Budhi Rapti—have been mobilised, according to the Laxman Prasad Poudyal, ecologist with the Department of National Parks & Wildlife Conservation (DNPWC).

“We have made sure that every segment has one group of technician. We have sent 11 groups for all 11 segments. The team includes two counters, who record the number of gharials upon sighting,” said Poudyal, adding, the team will continue the monitoring for consecutive three days to avoid replication.

Led by the DNPWC and conducted in the field by the CNP, the ongoing project is supported by the Biodiversity Conservation Centre, Sauraha, Zoological Society of London, Himalayan Nature and other local communities.

Despite also counting the populations of Gharials, the ongoing monitoring process is not census, according to Khadka.

“Through this monitoring, we will be only counting gharials visible outside the water. However, in census all the gharials including those inside the water is counted,” clarified Khadka.

Nepal began conservation of gharials since 1976 by establishing country’s lone breeding centre in Kasara of Chitwan. Every year, gharials from the breeding centres are left in Rapti, Narayani and two western Nepal rivers—Babai and Karnali. A total of 70 gharials—50 in Babai River and 20 in Karnali River—were left two years back.

Experts believe breeding centre has contributed in stabilising the gharials population not only inside Nepal, but also in India.

According to Khadka, who also heads the breeding centre, over 75 per cent of released gharials in Nepali rivers are washed down to India.

“We release our gharials but most of them go to India, contributing maintenance of gharials number there as well. They are washed down, but cannot come back due to anti-water current in human made barrages,” added Khadka.

Gharial habitat can span up to 200 km. Therefore, most of them reach Ganga river in India.

“Our rivers have limited stretch of about 100km. In this way they travel to as far as Ganga river system. For us, Nepal and India are two countries. For them, it’s their home, where they have been living for centuries long before human came there,” said Khadka.

Human activities have posed threats to gharials by causing fragmentation of their natural habitat. In Nepal, gharials have been enlisted as the protected species.

As per the latest census of gharials in 2016, a total 198 gharials—166 in Chitwan National Park and 32 in Bardiya National Park.