MAW Enterprises, the authorized distributor of Skoda in Nepal has launched New Škoda Kodiaq in the domestic market.

The Kodiaq is Skoda’s first ever SUV that offers seven seats. It is underpinned by the MQB platform which it shares with the Volkswagen Tiguan and Passat sedan. The Kodiaq stand alongside the Superb sedan as an alternate body style. It was showcased as the Vision S concept at Geneva last year and was unveiled in production guise at a function the Czech Republic in late 2016. The name Kodiaq is inspired from a species of Alaskan brown bear as well as town bearing the same name.

Skoda has launched the Kodiaq at Rs 10.49 million in Nepali market. Powering it will be a 2.0-litre TDI engine that produces 150PS of power and 340Nm of torque. Mated to the engine will be a seven-speed DSG transmission and power will be sent to the road via an all-wheel drive system. 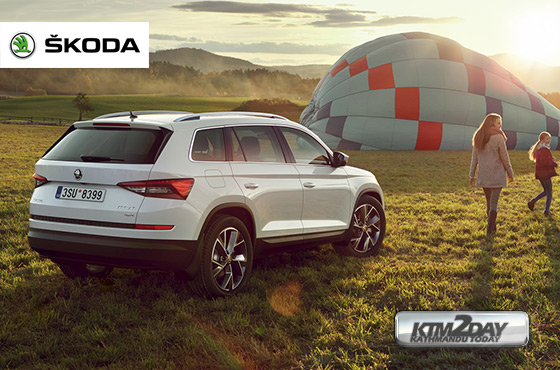 The Kodiaq gets the family face of the moustache grille and rectangular headlamps. The vertically slatted grille dominates the fascia and a three-part air dam lending it the required aggression. The swept back headlamps are projector units. The Kodiaq is a full-size SUV and it shows in its 4.7 metre long profile. It gets a long hood, a prominent shoulder line, squared wheel arches and a sloping roof. The tail should look sleek with the wrap around tail lamps, a raked windshield and a hemline on the tail-gate.

The claimed mileage for the Skoda Kodiaq is 16.25kmpl.

Its list of rivals will include the Ford Endeavour, Toyota Fortuner, Mitsubishi Pajero Sport, Isuzu mu-X and its German cousin, the Volkswagen Tiguan.