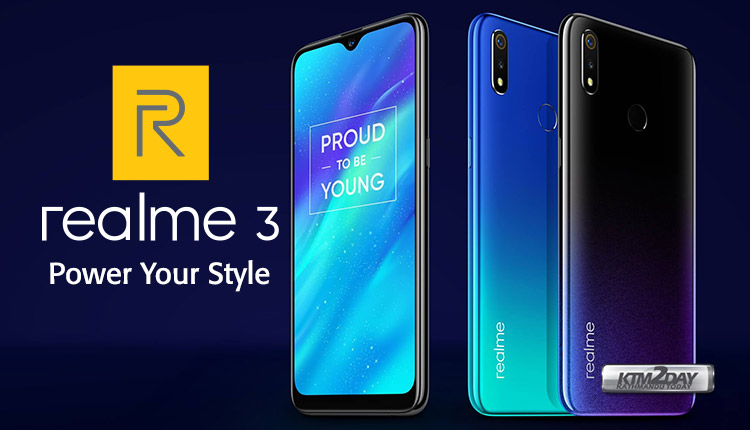 It’s been only 10 months since Realme first entered the smartphone market and the company has created quite a buzz in this industry. It has launched 5 different models in such a short period of time with Realme 1, Realme U1, Realme 2 , Realme C1(and 2019) and Realme 2 Pro. Its sports a unibody design made with plastic but the design look striking. The rear panel features a gradient colors design.

The Realme 3 ships with a 6.2-inch display with an HD+ resolution (1520×720 pixels). It has a 12-nm MediaTek Helio P70 SoC and is available in two variants — 3GB RAM, 32GB Storage; and 4GB RAM, 64GB Storage. Realme 3 supports expandable storage via a microSD card (up to 256GB). The smartphone features colorOS 6 based on Android 9 Pie, which is closer to stock Android than its predecessors. Realme 3 features a dual rear camera setup (13-megapixel + 2-megapixel) along with a 13-megapixel front camera. 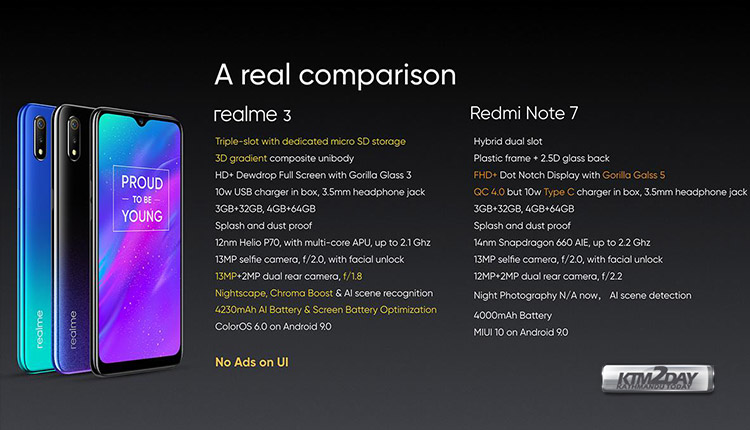 Realme had previously announced that the company will launch the Realme 3 Pro to take on Redmi Note 7 Pro .The Realme 3, like the entire Realme portfolio, aims to offer modern features in an affordable package.

The display comes with a dewdrop notch on the front which makes up 88.3% scree-to-body ratio with a HD+ resolution of 1520X720 only. A 19:9 aspect ratio and a 450 nits of brightness is accompanied by a Corning Gorilla Glass 3.

Only the Indian variant will come with Helio P70 while the global variant sports a lower Helio P60 Soc from Mediatek. It’s the same processor that’s on a Realme 1 , so the global variant which arrives in Nepali market at a later date will obviously be a low performance handset. The camera setup also sees an upgrade and features a 13MP primary shooter with a bigger f/1.8 aperture and 2MP depth sensor for portrait photography. Realme is also including a dedicated night mode called Nightscape for better night photography and the Chroma Boost mode, which helps bringing out more details and dynamic range in tricky lighting conditions. The front camera has also been updated from an 8MP shooter to a 13MP f/2.0 sensor coupled with a larger 1.12-micron pixel size. On the software front, the device comes running Android 9.0 Pie with Realme’s custom UI ColorOS 6.0 running on top. Other specifications of the Realme 3 include a 4,230 mAh battery, a micro USB port, a 3.5mm jack, a rear-mounted fingerprint scanner, Bluetooth 4.2 and 2+1 SIM tray. 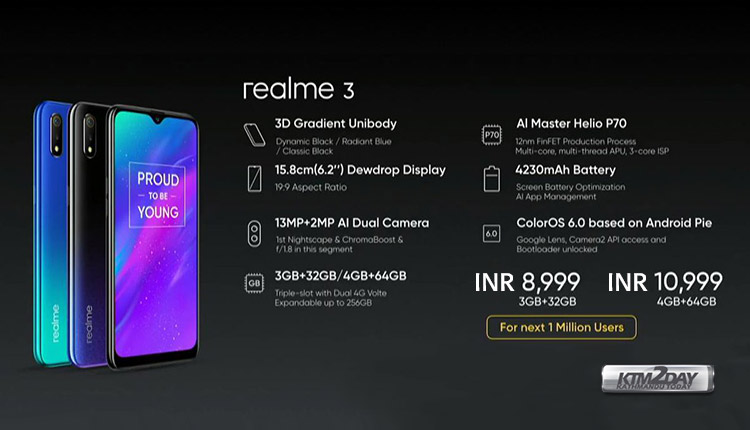 The Realme 3 will be available in India exclusively on Flipkart in three color variants – Dynamic Black, Radiant Blue, and Black.

Realme 3 has been launched in Nepali market.The models are slightly expensive than Indian prices due to added taxes.

Realme Nepal has launched the Realme 3 in two memory storage options. The first is the 3GB RAM with 32 GB internal storage and is priced at nepali Rs 19,690.

The second option of 4GB RAM with 64 GB internal storage is priced at nepali Rs 23,290.