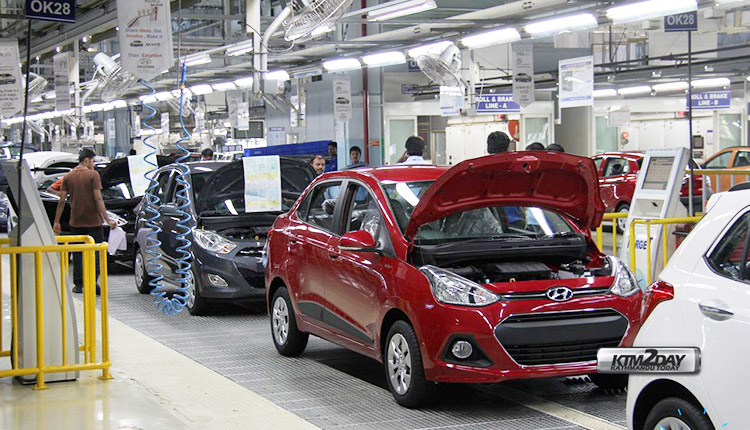 South Korean car company Hyundai Motor has resumed production at its Sriperumbudur plant in Chennai. All operations at the manufacturing plant were halted from 23 March 2020 due to a nationwide lockdown.

Hyundai Motor India on Saturday has announced that it rolled out 200 cars on the first day of production resumption at its plant in Sriperumbudur, Chennai on May 08.

The South Korean automaker claims that the production resumption has been done following the guidelines from Ministry of Home Affairs. Hyundai intends to produce around 12,000-13,000 vehicles this month, with production divided into shift of operations.

Hyundai has also resumed operations in its 225 showrooms and workshops across the country. In the first 2 days, the company has received 4,000 customer inquiries and 500 bookings. Also, the company has managed to sell around 170 vehicles. To make the buying process easier, EMI Assurance Program has been introduced for selected new customers, which will cover up to 3 car loan EMIs. However, this scheme is not valid for cars like Creta, Elantra, Tucson and Kona.

The company had launched a 2020 version of new Creta a few days before the lockdown. The premium compact SUV has received 20,000 bookings so far. Hyundai has postponed the launch of the new Tucson facelift and the new-generation Hyundai i20 due to the Covid-19 pandemic.

The updated Tucson’s official bookings were operational just before the lockdown. Hyundai’s SUV will come in three trims (GL 2WD, GLS 2WD and GLS 4WD) and will be powered by petrol and diesel engines. At the same time, the new-generation Hyundai i20 has also been spotted several times. This mid-sized family car may arrive in showrooms in September.