A screenshot showing Geekbench results of an Intel Core i9-12900HK laptop processor has surfaced online. The CPU has fourteen cores and twenty threads and runs at a clock speed of 2.9GHz. It is not known when laptops with this CPU will be released.

The screenshot was published by Wccftech. This shows that the laptop CPU achieves a single-core score of 1851 and a multicore score of 13,256 in the Geekbench benchmark. The processor performs better in that benchmark program than the Apple M1 Max, which according to Wccftech single and multicore scores of 1785 and 12,753 respectively. 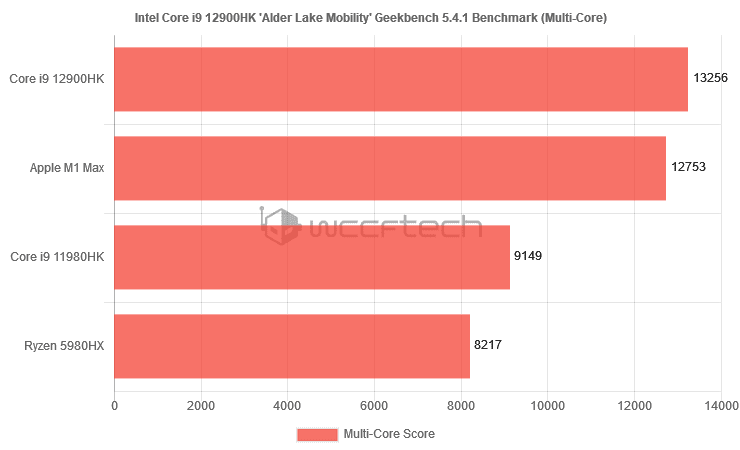 The Intel Core i9-12900HK scores in Geekbench, compared to other chips from AMD, Apple and Intel. Source: Wccftech

The upcoming Alder Lake chip will also score higher Geekbench scores than the current Intel Core i9-11980HK and the AMD Ryzen 9 5980HX, at least assuming standard clock speeds, without manual overclocking. However, these Core i9-12900HK scores also outperform the highest 11980HK and 5980HX scores in the entire Geekbench database, including any overclocking.

The screenshot further shows that the Intel Core i9-12900HK has fourteen cores and twenty threads. This means that the processor has six powerful P-cores with hyperthreading and eight efficient E-cores without hyperthreading.

Intel published a developer optimization guide earlier this month, confirming that this will be the maximum number of cores for Alder Lake laptop processors. The screenshot also mentions a base clock of 2.9GHz and an incorrect turbo frequency of ‘371MHz’. The CPU has been tested on Windows 11 Pro.

The Core i9-12900HK processor is not in Geekbench’s public database. The developer of this benchmark recently announced that results of pre-release hardware can no longer be published in the online database. However, such hardware can still be tested in Geekbench, so screenshots of Geekbench results can still leak, as is the case here.

According to previous rumors, the Alder Lake laptop CPUs will appear in the first quarter of 2022. Intel is expected to release its first desktop variants on November 4, but laptop processors and lower-ranked desktop chips would follow later.