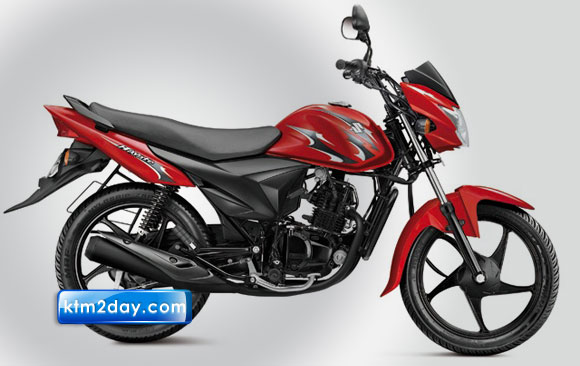 The entry-level two-wheeler segment will soon see a new member with Japanese auto major Suzuki planning to roll out the Suzuki Hayate by April. According to Ganesh International, the sole authorised distributor of Suzuki in Nepal, the coming motorcycle is stylish and will cater to the demand of people looking for an entry-level commuter bike with style. The machine to be sold in Nepal will be imported from Suzuki India.
The aggressive promotional strategy of Suzuki India for this new motorcycle has made it a big success in the Indian market. It has also helped the company to earn loyal fans in Nepal who have been eagerly waiting for the arrival of the Hayate.
“We had planned to launch the Suzuki Hayate in January. However, due to its high demand in the Indian market, Suzuki India does not have adequate stock for export to foreign markets including Nepal,” said Upendra Sigdel, marketing manager at Ganesh International. “Suzuki India has pledged to make the two-wheeler available in Nepal by April.”
The entry of the Suzuki Hayate will increase the competition in the domestic two-wheeler market, which is already teeming with models like the Bajaj Discover, Yamaha YBR, Hero Passion Pro, Hero Splendor and the Honda
Dream Yuga. Commuter segment motorcycles have a significant market share in the country’s two-wheeler market as they are considered to be the most efficient and easy mode of mobility.
In terms of looks, the new two-wheeler is identical to its preceding model the Suzuki Slingshot. The bike’s front mudguard and headlight look aerodynamic, and it uses an all-black theme with major components like the silencer, engine, alloy wheel and side panels featuring black colour. The Hayate’s tail light and grab rail is quite identical to the Honda Shine.
The new offering from Suzuki has a mono-cylinder, air-cooled, 112.8 cc SOHC engine. The machine’s four-stroke engine has a capability to generate a peak power of 8.3 bhp at 7,500 rpm and a maximum torque of 8.4 nm at 5,500 rpm. The Hayate’s engine has been mated with a four-speed manual transmission system with all gears in a down-shift pattern.
Suzuki India has claimed that the motorcycle delivers a mileage of 65 kmpl. For the comfort of riders, the bike has telescopic, coil spring front suspension with five-step adjustable rear shock swing arm suspension. The bike has 130 mm front and 110 mm rear brakes.
Ganesh International has stated that the company plans to promote this commuter machine mainly in the Tarai region. “We are receiving frequent queries from our dealers as well as prospective buyers,
and most of them are from the Tarai,” Sigdel said. The Hayate will increase the company’s market penetration which has a relatively small share in Nepal.
The Suzuki Hayate is the perfect commuter for city streets as it weighs less and allows users to move quickly in tight spaces. It has a ground clearance of 165 mm and a wheelbase of 1,260 mm.
According to Ganesh International, the bike will be available in pearl mirage white, metallic lush green, pearl misca red, GL sparkle black and metallic flint grey colour options. To position it tightly with its competitors, the company is planning to price it in the range of Rs 150,000 to Rs 155,000.