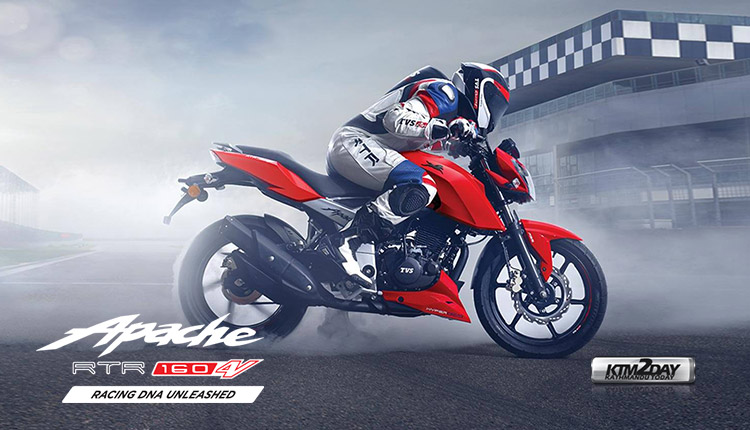 Jagadamba Motors has launched the new version of motorcycle from the RTR series, the RTR 160 4V BS6 in the nepali market.

The new Apache RTR 160 4V BS6 is sold alongside its predecessor, the Apache RTR 160. The new RTR 160 4V now looks similar to the larger RTR 200 thanks to parts like the headlamp, fuel tank, instrument console and tail section being borrowed off the bigger bike.

It is available in three colours: black, blue, and red. Power is courtesy an all-new 159.7cc, air and oil-cooled single-cylinder motor.

The Nepalese market for the TVS Apache RTR 160 4V is becoming increasingly pricey. The ABS model’s price has been raised by Rs 5000.

According to the most recent pricing information, the current Nepali Apache 160 4V ABS price is Rs. 3,39,900.

The TVS Apache RTR 160 is a popular motorcycle. Furthermore, it was the first 160cc motorcycle to be equipped with Bluetooth SmartXConnect.

With that in mind, let’s take a look at the TVS Apache RTR 160’s features, specifications, all available models, and the official price.

The Apache RTR 160 4V BS6 is one of the most popular motorcycles sold by TVS in Nepal. It has a sporty design, powerful performance, and a bass-heavy exhaust.

The TVS Apache 160 4V BS6 bears some resemblance to the Apache RTR 200 in terms of appearance. Based on the “Draken” design concept, it makes a race-tuned vehicle available to the general population.

There’s also an aggressive tank shroud and a razor-sharp engine cover on this bike’s headlight configuration.

The dropped tail gives the motorcycle a premium commuter look rather than an aggressive naked streetfighter appearance, which appears to soften the overall design.

A five-speed unit transmission is also included with the bike. There are fewer vibrations with 4-valve technology as well as higher performance and fuel efficiency.

At a 160cc class level, this is the most polished and best-in-class performer available.

The motorcycle weighs approximately 147 kg and has a 12-liter gasoline tank. Furthermore, under real-world situations, it may reach a mileage of 40-45 Kmpl.

The is built on a Double cradle Split Synchro Stiff Frame. The front suspension consists of telescopic forks, while the back features a mono-shock.

A 270mm disc brake up front and a 130mm drum brake in the back take care of the braking responsibilities. For improved stopping power, the disc version comes with an optional 200mm rear disc brake.

There is an option for single-channel ABS, though, in the ABS variant.

A 17-inch alloy wheel may be found at each end of the vehicle. Both the front and back tires are tubeless, with a diameter of 90/90 and 130/70.
Features

Apache RTR 160 4V has a lot to offer, including intriguing options. TVS’s SmartXonnect is one of the most popular features. Riders may attach their smartphones to their bicycles using Bluetooth.

It has a built-in GPS, as well as call and text notification capabilities. A Lean Crash Alert, Angle Mode, and Race Telemetry are also included.

Among the motorcycle’s notable features are the following:

You can choose between three models of Apache RTR 160 4V, which include the standard model (SD) and the RD model (RD).

The front brakes on the SD are a single disc, while the rear brakes are a drum. The RD model includes disc brakes on both ends, much like the standard model.

Finally, the newcomer is the BS6 variant which includes ABS, Double Disc brakes and a SmartXconnect feature. 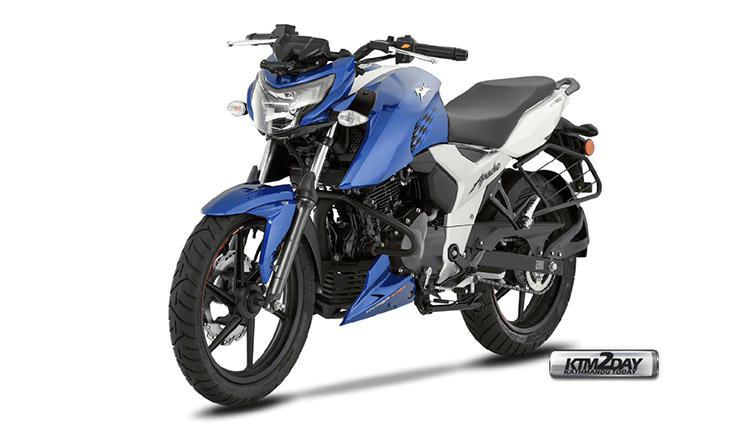 Power and torque of equal capacity are provided in all the three refresh variants. . The maximum power of these bikes is 12.97 kW and the torque is 14.73 Nm.

When it comes to competitors, the Bajaj Pulsar NS160, the Honda Hornet, and the Suzuki Gixxer 160 are the most notable. Despite this, it’s still the most powerful bike on the market, and it’s packed with new features.

Call Jagdamba Motors-TVS at 01-4231057 if you have any further questions about financing or offers.