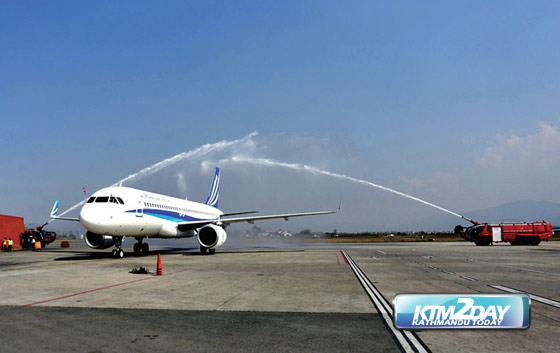 The new aircraft, with the registration number 9N-ALM, received a water cannon salute upon its arrival, adopting the tradition in the aviation industry. To mark the show, the ferry team was welcomed by a Nepal Army Band playing the auspicious ‘Mangal Dhun’, as per a media release.

The aircraft was delivered to Kathmandu from Chengdu, following the aircraft handover ceremony represented by Cheng Hui, president of the company.

The airline’s new A320 aircraft has 158 seats in two class configurations, eight for business and 150 for economy, ensuring high level of flying comfort. The airline plans its international flight services from April, flying directly to Delhi and Doha on a daily basis (subject to regulatory approvals) providing convenient travel connections.

“We are pleased to welcome the first aircraft of our company A320-214, which will help strengthen the air connectivity of Nepal to international network. This marks the opening of a new chapter of commercial aviation in Nepal and I am confident that Himalaya Airlines will also contribute to attaining the country’s objective to promote tourism sector,” the release quotes Shrestha, as saying.

Himalaya Airlines, a full-service carrier, established in August 2014, has planned to start international flights from April. The airline has made full preparation in terms of training flight crew and maintenance personnel and has in place systems, people and infrastructure to start commercial flights.

Over the coming five years, the airline aims to acquire 15 Airbus 320 family aircraft and will operate from Kathmandu to various cities in Asia and beyond. The company will introduce long haul wide-body aircraft of A330 family in due course of time for the operation of direct flights to Japan, Korea, Europe, Australia, and America.