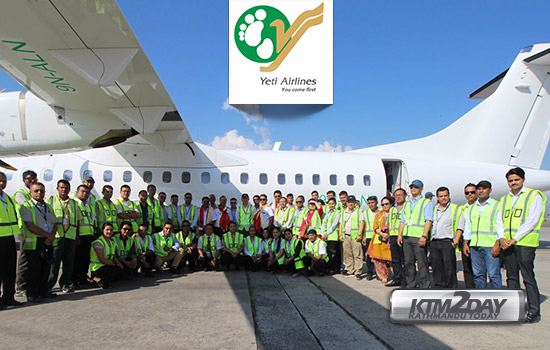 Yeti Airlines has added third ATR 72-500 aircraft to its fleet.

This aircraft with call sign 9N-ALN arrived in Kathmandu on Tuesday approximately at 1,450 hours after its flight from France-Toulouse-Italy-Egypt via Muscat, read statement issued by the Yeti Airlines on Tuesday.

The ATR72-500 is a twin-engine turboprop aircraft manufactured by the French-Italian consortium ATR. With its superior build and performance, the ATR72 has become one of the most successful regional carriers in the world, steadily expanding and entering into new global markets.

This ATR72-500 aircraft has been purchased from KF Turbo Leasing Limited and will be one of the youngest ATR72 aircraft operating in Nepal. With the addition of this aircraft, Yeti Airlines will expand its ATR72 operations to Bhadrapur and Pokhara – and will help facilitate Nepal achieve its target of 2 million tourist arrivals by the year 2020.