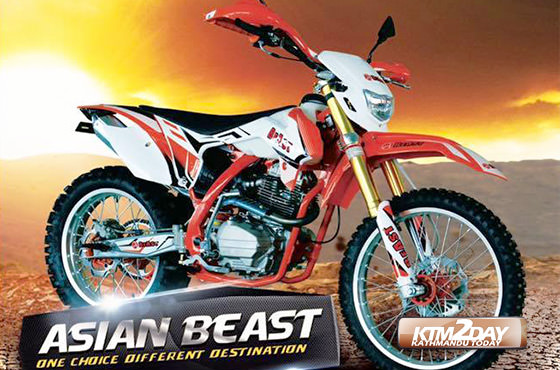 Asian Group of Companies has launched a 250cc motorcycle called the Asian Beast 250. The new company has already recorded over 100 bookings for the motorcycle.

Distributors will be launching the motorcycle in major cities across Nepal like Kathmandu, Pokhara, Butwal, and Itahari.

The Asian Beast is powered by a 250cc, 4-stroke, single cylinder engine which is air cooled. The company claims that the motorbike will give a mileage of up to 35km per litre of petrol. Asian beast is mated to a 5-speed manual transmission. The 250cc engine churns out a maximum power of 22.5 bhp and maximum torque of 18.5 nm at 6500 rpm.

Asian Beast is powered by a 250cc, 4-stroke, single cylinder engine and gives a mileage of 35km/l

With a ground clearance of 300mm, Asian Beast Bike is able to traverse rocky, steep places easily. The company claims that the motorbike is also suited for city riding with its 4-stroke air cooled engine. The motorbike weighs 108 kg which makes handling easier along with delivering good power to weight ratio. It has a seat height of 900mm.
The Asian Beast 250 is equipped with both electric and kick start along with disc brakes on the front and back. The motorcycle has a 7.5 litre fuel tank.

According to Aman Shrestha, manager at Asian Beast showroom in Nagpokhari, Kathmandu, the Asian Beast 250 is targeted at those who want to balance off-road riding with city rides. “Youngsters will especially prefer this kind of motorcycles,” he added.

The company is offering two years of engine warranty. The company has yet to decide on a location for their service centre.

Shrestha revealed that 300 units of Asian Beast 250 motorcycles will be brought into Nepal for sale in the first phase, highlighting strong demand for these motorcycles.