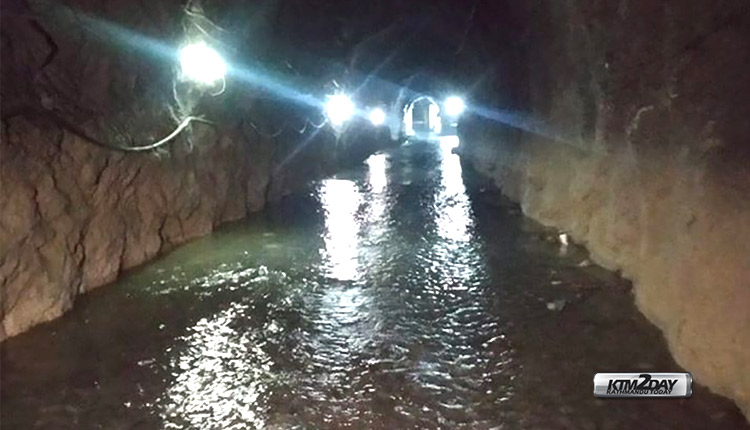 When do Kathmanduites get to drink Melamchi water? Officials of the Ministry of Water Supply, who have been facing this question for years, announced at a press conference on Sunday afternoon that the project has entered the completion phase.

The Melamchi tunnel was filled with water at 9:45 am on Sunday. Government officials have called it a great achievement in the construction of the project.

But she could not say when the project would be inaugurated. Secretary at the ministry Madhav Belwase also said that the date could not be fixed as it was a technical matter.

According to the Minister, the inauguration of the project means that Melamchi water will reach the homes of the consumers. However, there is still some time to wait for this.

According to Melamchi Drinking Water Project Chief Tiresh Kumar Khatri, it takes 15 to 20 days to fill the 26 km long tunnel of Melamchi. At present, water is flowing in the tunnel at the rate of 260 liters per second as per the technical criteria for testing. After the tunnel is filled with water, it will be kept the same for about 10 days. After that, water will be released at the rate of 260 liters per second and it will take 15 to 20 days for the tunnel to be emptied.

The quality of the tunnel will be tested after all the water is discharged. It will take about 7 days. If there is any problem in that process, it should be addressed. It is difficult to predict now. And, only after all this work is done will the tunnel be filled with water regularly. The water will be sent to the distribution system through two treatment plants in Sundarijal. Project officials say it will take two to three months to start sending Melamchi water to the main distribution line when all conditions are normal.

Also, permanent dam and sand dredging structure (headworks) of the project have not been constructed yet.

Project Chief Khatri states that “It will take time to manage the distribution system for a year after the water has been brought to Sundarijal” . He said that the old system will be replaced by new ones and water will be  delivered to the consumer houses gradually.

As per the agreement, the Ministry of Water Supply and Melamchi Drinking Water Development Committee have provided necessary facilitation to the construction businessmen to complete the remaining works of the tunnel and construction of alternative structures for water diversion within the stipulated time.

The ministry has claimed that the flow of water in Melamchi River, Indus, Gyalthum and other areas including Audit Tunnel as well as Bagmati River could increase at any time. The ministry has advised the public to take special precautions when going to the river bank.