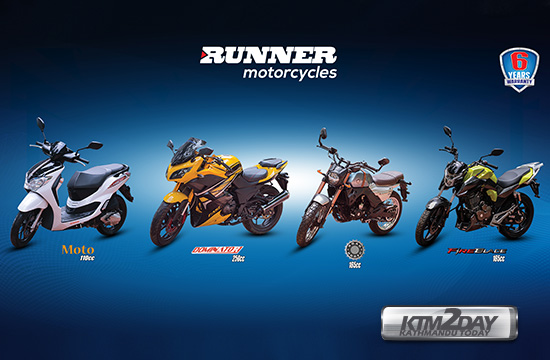 The company said in a statement that it launched the new variants between 150cc up to 250cc to address the demand of Nepalese customers for bikes with higher cc.

Among them, the Hawk 200 cc is perfect to enjoy the off-road terrain of Nepal, according to the company. The 200cc bike gives a maximum power of 9Kw at 7000 rpm which generates a torque up to 14 Nm at just 5500 rpm. Its air cooled four-stroke petrol engine is equipped with CG balancer. For safety, both the front and rear brakes are loaded with wide size disc brakes and a sufficient ground clearance of 155 mm. Hawk is available in two vibrant colors.

Fireblade 165 cc, another series of Runner bikes, comes with CDI TYS engine which gives maximum power of 10KW @ 9000 rpm and contributes to a maximum torque of 11.5 NM at 7500rpm. Fireblade comes with best in class fuel tank capacity of 18 liters which helps in reducing frequent fuel refilling headache, the company said in a statement. The Fireblade is sufficiently suitable for off-road ride as well as smooth black topped roads as the ground clearance is 170 mm. Fireblade comes in vibrant red, blue and lime colors. 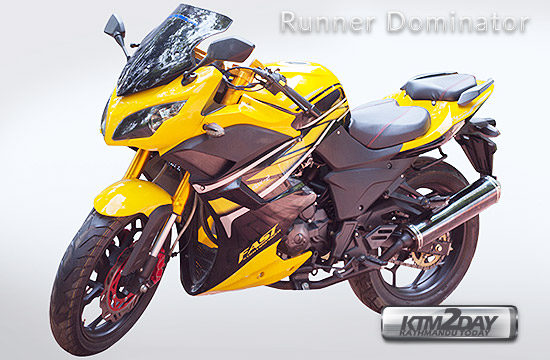 Likewise, the Dominator 250 cc comes with 250cc engine 4-stroke air-cooled engine with balance shift. Dominator generates a power of 16.5 KW @ 8500 rpm and contributes to 20NM torque at 7500 rpm. Few added special features which makes standout among other bikes is its aggressive sporty looks, style, and aerodynamic body structure, according to the company. Duel silencer is another feature of the bike which has mono suspension, giving it awesome maneuverability. Dominator comes with 150mm ground clearance suitable for rough roads.