Goma Air to start flights to Lukla and Jomsom 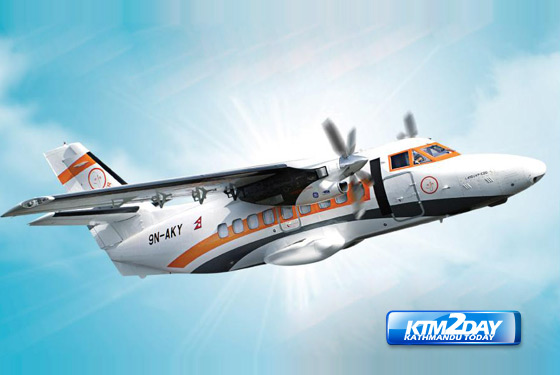 Goma Air today announced two new destinations — Lukla and Jomsom — and said the airlines aims to connect to all destinations within the country in the future. Moreover, the airlines is preparing to start operation with its newly purchased aircraft very soon. On Thursday, Goma Air’s new aircraft — 19-seater LET410 UVP-E20 — arrived in Nepal. Addressing a press conference today, Manoj Karki, managing director of Goma Air, said that the new plane will begin service soon after some pending paper works with Civil Aviation Authority of Nepal (CAAN) are completed.“We are planning to fly across the country while being based in Kathmandu,” said Karki. So far, the airline is flying to Jumla, Simikot, Dolpa, Bajura and Rara with flights based from Surkhet and Nepalgunj with two Cessna Grand Caravan aircraft.Goma Air has also said that it is buying yet another Czech Republic made LET410, which is scheduled to arrive in Nepal within this year. Besides investment from Nepalis, Czech Republic Export Bank also has a certain stake in the project as loan. This marks the first investment in the aviation sector from the Czech Republic. The LET410 is the first of its kind aircraft in the South Asia region. This also is the first time in almost four decades that a brand new multiengine turbo prop aircraft has been brought to Nepal by a Nepali company for operation in short take off and landing (STOL) airfield.As the aircraft is new in this region, the Czech Republic manufacturer of the aircraft — Aircraft Industries — has asked Goma Air to take the aircraft to the air show in India slated for February 2015. The aircraft will also be taken to Bhutan later this year. Miloslav Stacek, ambassador of Czech Republic to Nepal, said the aircraft is suitable for difficult airfields and high altitude terrain of Nepal. “This is a moment of big success,” he said, adding that the Czech Republic is looking forward to deliver more aircraft not only to Nepal but also to countries like India, Sri Lanka and Bhutan of South Asia. Earlier, Goma Air had announced it was bringing in the LET410 within February 2014. Karki said that the arrival of the new aircraft was delayed due to the long loan processing with the Czech Republic Export Bank and because it took a long time to receive permission from the Department of Industry and Nepal Rastra Bank.The bank had decided to fund the project after studying Nepal market based on the permission from the European Union (EU). The permission of the EU to finance the aircraft to be flown in Nepali skies is also a positive indication toward the recent EU advisory, according to the company. To acquire Nepali registration, the Czech manufactured aircraft had made successful test flights on Pokhara-Jomsom route on December 7 and Kathmandu-Lukla route on December 9 last year. The two routes, especially the airfields in Jomsom and Lukla, are considered the most challenging in the country.The new aircraft of Goma Air is also European Aviation Safety Agency certified and there are more than 340 L410 UVP-E20 aircraft in operation in more than 50 countries at present.