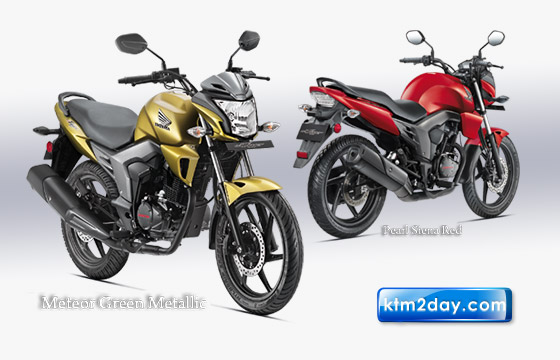 Syakar Trading Company (STC), the authorized distributor of Honda two-wheelers for Nepal, has unveiled the all new CB Trigger motorbike in the domestic market.

Unveiling the bike, Saurabh Jyoti, vice-chairman of STC, said that the sporty look of the premium 150cc bike basically targets youth riders of the country. Stating that Honda holds 20 percent market share in the 150cc segment in Nepal, Jyoti said they were optimistic that the new model will increase market share to more than 0 percent.

The CB Trigger comes with contoured tank and 3D Honda emblem along with floating side cowls and arrow shaped trendy side panel which contributes to the aggressive look, according to the company. Moreover, the Trigger has muscle lines in the side panel and black sporty muffler to emphasize the character of the bike.

At the front, the bike has head light with air scoops on the visor and the stylish panel on head front stance. The bike uses LED tail lights.

Likewise, CB Trigger comes with the option of Combi Brake System (CBS) for the first time in the 150cc segment. CBS is an easy to operate feature that reduces braking distance by 32 percent compared to conventional braking.

“The mono suspension in the bike ensures mass centralization leading to better stability and riding confidence even in the sharpest of road turns,” the company said.
The CB Trigger is available in four different colors — white, pearl siena red, black, and meteor green metallic.

Jyoti said the company aims to sell 5,000 units of CB Trigger within a year of launch. “The CB Trigger is one of the best products of Honda. We hope it will be the primary choice of Nepali riders,” Jyoti claims, adding: “Honda will launch other new products in future targeting the demand of customers of all segments.”