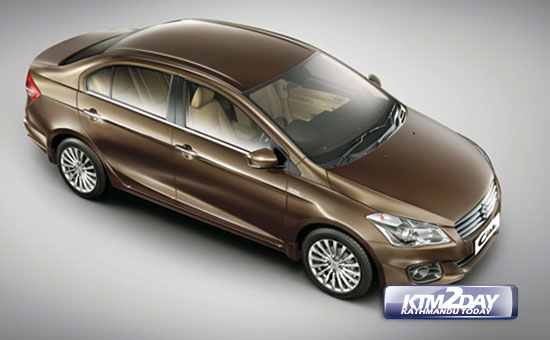 CG Motocorp, the authorised distributor of Maruti Suzuki cars in Nepal, has launched the Ciaz sedan in the domestic market. The car comes in petrol and diesel variants, powered by 1.4 litre and 1.3 litre engines respectively. The price of the Ciaz starts at Rs 3.29 million.

Launching the vehicle on Saturday, Shashank Srivastava, executive director at Maruti Suzuki India, said that they were confident of receiving a good response in Nepal as the new sedan that comes in a new platform is packed with advanced features.

“We have received an encouraging response in India with 17,000 units sold since the launch in October, and we hope that the vehicle will do well in Nepal too,” he said. “As the Ciaz is a complete package of style, efficiency, safety and comfort, it will capture more than 20 percent of the sedan market in the country this year.”

Arun K Chaudhary, managing director of CG Motocorp, said that the Maruti Suzuki Ciaz would set a new landmark in the country’s sedan market. “In terms of price, style and features, the vehicle stands out strongly against its competitors,” he said.

The company said the vehicle had been built on Suzuki’s Total Effective Control Technology (S-TECT) concept and uses high tensile strength steel for the safety of passengers. The Ciaz’s petrol version has a 1,373 cc capacity engine while the diesel version comes with a 1,248 cc engine. The vehicle is 4.49 metres long and has a width of 1.73 metres.

It is equipped with 15-inch alloy wheels and has a 2.65 metre wheel base.

The Ciaz will be available in seven colours like pearl snow white, dignity brown, sangria red, silky silver, glistening grey, midnight black and clear beige. The company said that bookings had started and that the vehicle would go on sale across the country within a week.