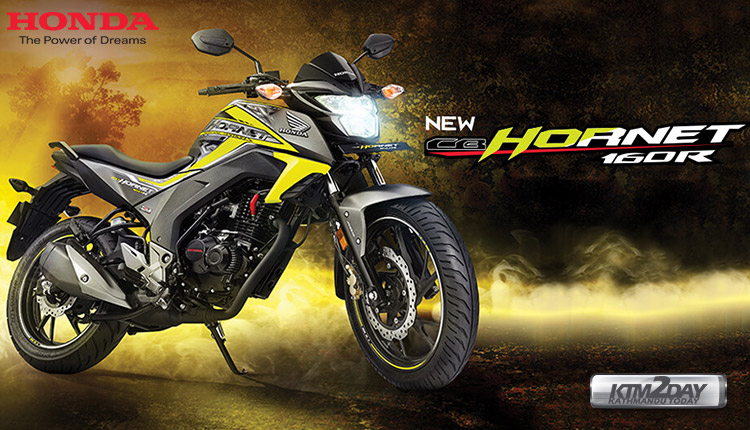 Syakar Trading Company, the authorized distributor of Honda motorcycle, scooters and cars for Nepal, has unveiled an upgraded model of CB Hornet 160R in the Nepali market.

The Honda Hornet 160R is the Japanese two wheeler maker’s third attempt at luring in the young. It tried with the Dazzler and then with the Trigger, but both bikes were half-baked attempts. The Dazzler completely lacked appeal and the Trigger was just a Unicorn in fancier clothing.

According to the company, the new CB Hornet 160R adds a sporty outlook to the bike with its aggressive styling and new graphics with five color options – green on grey, orange on grey, blue, red and yellow.

The Honda Hornet 160R’s closest competitors are the Yamaha FZ-S and the Suzuki Gixxer. There’s also the Hero Xtreme Sports to consider.

The major updates on the motorcycle include its upgraded styling with full LED headlamp and hazard light switch, which is an important safety feature for emergency stops and for low visibility conditions, the company said in a statement.

Other features available in the bike include a better grip of tyres and durable seal chain which prolongs the chain life and benefits the customers with low maintenance cost. The price of Honda CB Hornet 160R is Rs. 2,99,900 in the Nepali market.