Huawei’s sub-brand Honor has emerged from a company that started initially selling budget smartphones to a full fledged premium lineups in a short span of time. Honor’s premium lineup of Honor 20 series phone has been making the rounds in news since last couple of months as its launch date is closing in.

The company recently launched its affordable variant of this series in the form of  Honor 20 Lite with Snapdragon 710 SoC at an impressive price tag. The other premium duo of this series – Honor 20 Pro and Honor 20 are awaiting their launch which is scheduled to take place on May 21. The Huawei Honor 20 Pro will come with quad camera setup on the back placed at the upper left corner of the body. The main sensor will be 48-megapixel Sony IMX586, and the lens aperture will be of much larger aperture of  F/1.4, which will allow you to take high-quality images in low light conditions. The wide-angle sensor will come with a 16-megapixel image sensor and an F / 2.2 aperture lens with a viewing angle of 117 degrees. 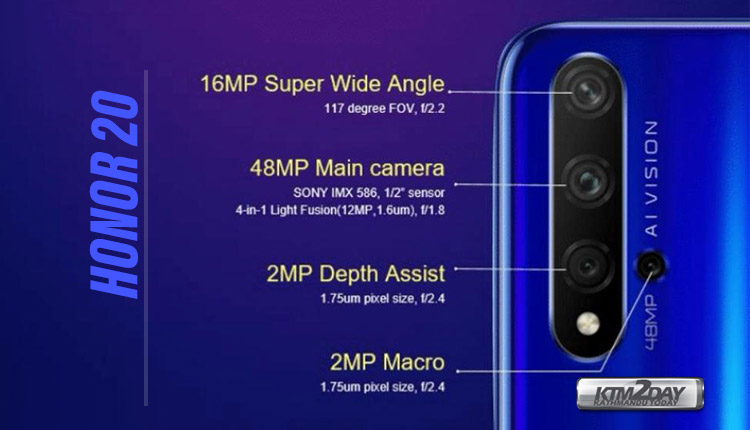 With the Honor 20, this quad-camera setup includes a 48-megapixel primary sensor which is said to have a “4-in-1 Light Fusion” system, which will mostly likely save a 12-megapixel image by default. It’s a 1/2-inch sensor with an aperture of f/1.8.

Above it, sits a 16-megapixel wide-angle lens with a 117-degree field of view (FOV) and an aperture of f/2.2. The image also shows a 2-megapixel depth sensor. The fourth camera is a 2-megapixel macro lens with a f/2.4 aperture, sitting on the right of the main camera cluster.

The Honor 20 phones – both Pro and vanilla – will be unveiled on May 21. There will also be a Moschino Edition.