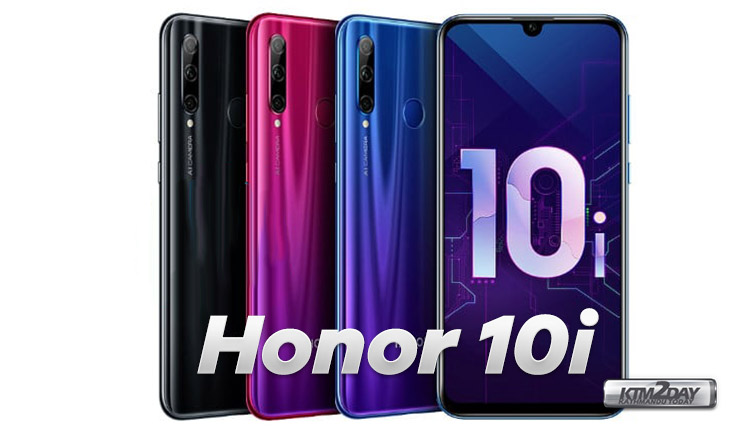 The Honor 10i is a mid-range smartphone that is almost identical to the original Honor 10 Lite but comes with additional camera hence it boasts a triple camera setup on the rear panel. The front selfie camera is also upgrade from the Honor 10 Lite’s 24 MP to the 32 MP on the Honor 10i.

The device comes with 4 GB of RAM coupled with 128 GB of internal storage and can be further expanded to 512 GB using microSD card slot but in this case utilizes the SIM 2 slot. The front selfie camera on the Honor 10i comes with 32 MP f/2.0 AI-powered snapper with HDR capability and can shoot 1080p videos at 30fps.

The device has a Li-Po 3400 mAh battery and runs on EMUI 9 on top of the Android Pie 9.0 operating system.

The phone will be offered in three colour options. The Red and Blue variants will come with the 3D gradient finish on the back, whereas the Black will have a 3D finish without any gradient.

Among other specifications, the phone features 4G VoLTE support, a 3,400mAh battery, a rear fingerprint sensor, Bluetooth and Wi-Fi.

The price for the Russian market hasn’t been announced yet, but local media expects the Honor 10i to cost at least RUB 19,990 – which means approximately $310 or €274. Hopefully the phone will be unveiled in more places soon, so we’ll have official info on this as well.