The cooling system now has a 7 fin oil cooler for better heat control in heavy traffic.

The Hero Xpulse is a beloved and well-known motorcycle in Nepal. In addition, the most recent 4V model features an improved engine and a more pleasurable ride.

However, there hasn’t been any major changes to its appearance compared to its predecessor. At nighttime, the LED headlight delivers superior illumination and a new body design.

Front fender, knuckle guards, a wide saddle, and an upswept exhaust are still included. In addition, because of its compact and functional design, it resembles a traditional adventure tourer.
Trail Blue, Blitz Blue, and Red Raid are the three new color schemes that have been added.

According to the manufacturer, the new engine has a torque increase of 5% and a power increase of 6% over the previous 2-valve system. As a result, the motorcycle’s mid- and high-end performance is enhanced, and vibrations are decreased.

Another new feature is a 7-fin oil cooling system that improves heat dissipation during periods of high traffic. A 5-speed manual gearbox is standard on all models that meet BS6 emissions regulations.

The 158 kg weight and 825mm seat height of the Hero XPulse 200 4V motorcycle. A rider with an adventurous spirit would appreciate the vehicle’s 220mm of ground clearance.

There is a 13-liter petrol tank on the bike. According to the manufacturer, it is capable of delivering up to 40 kilometers per gallon.

The physical components of the Xpulse 200 4V remain untouched. There are two 37 mm telescopic forks up front with 190 mm travel and a 10-step pre-load adjustable mono-shock in the back.

Petal discs in both the front and back have the same 276 mm diameter. Single-channel ABS is also included as a standard feature.

To keep drivers informed of incoming calls, text messages, and other notifications, the Hero XPulse’s digital LCD instrument cluster connects to a smartphone through Bluetooth.

The Hero Xpulse 200 4V’s other notable features include the following: 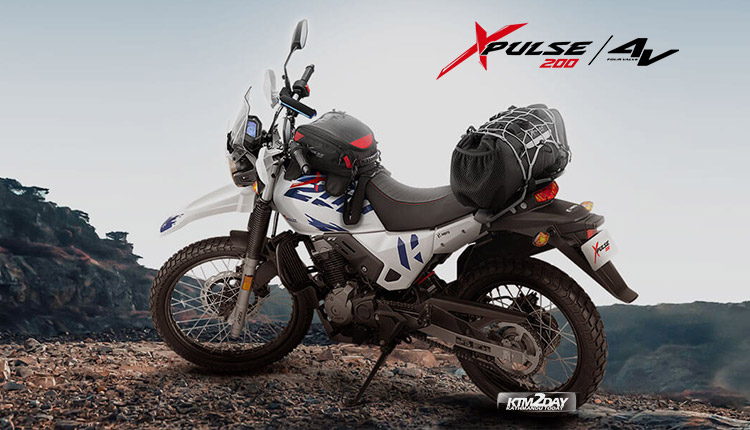 The company will sell XPulse 200 4V in Nepal in three different color variants. The color options will include red-black, white-blue and black-blue. The price of the new BS6 model is set at Rs 4,50,000.

Rivals include the Honda CB 200X, which will be released in the near future, and the TVS Apache RTR 200 4V.