Buses with toilets to be operated on the Pokhara – KTM route 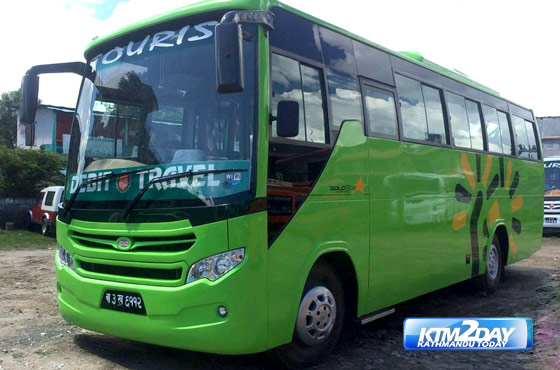 Debit Tours and Travel Company has imported two commuter buses with toilets to be operated on the Pokhara – Kathmandu route.

Company chief Pradeep Kafle said the buses have been imported from India and will come into operation within two days. “We hardly have toilets along the highway while passengers request drivers to stop the bus to answer the nature’s call. Commuters, especially women, face a great difficulty while travelling due to lack of toilets along the highway,” he said.

According to him, the buses have 30 seats each. He claimed that such buses are being operated for the first time in the country. The buses will carry both domestic and foreign tourists. One way ticket for travel by the bus would cost Rs 1,000. The buses will operate on alternative basis on the highway.
“It cost us around Rs 700,000 more for the bus. We paid Rs 8 million each for the buses and it has facilities such as AC, Wi-Fi, mobile charger and fans in each seat,” he informed.

“All commuters, especially women, children and the disabled, will be benefitted from the service,” said Ram Kumar Shrestha, driver of the company. After the septic tanks are full, the human wastes would be disposed of at Gunadi along the highway.

The catastrophic 7.8 magnitude earthquake of April 25 and its subsequent aftershocks have hit the tourism sector hard. However, despite the challenges, the bus operators are optimistic that the situation would change for the better.