New Smartphones lined up for launch in Nepali market 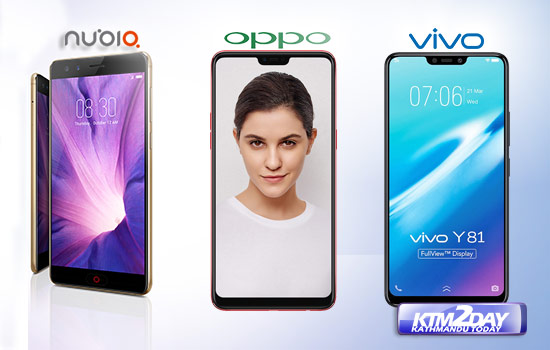 With the festive season coming up soon, smartphone dealers in Nepal are gearing up to launch new models in the market. Smartphone sales surge during festivals and mobile companies want to ride the wave by launching new devices.

Mobile companies such as Vivo, Nubia and Oppo have launched different models of smartphones in recent months and plan to introduce new smartphones soon.

Vivo is quickly gaining market share in Nepal, with over 6,000 units sold in June. Vivo V9 and V9 Youth are their best selling smartphones.

According to Puskal Khatiwada, sales and marketing head at Nubia, the company will be gradually expanding its presence in different parts of the country.

Similarly, the company in collaboration with Ncell, will be offering data packs with every purchase of a Nubia smartphone.

Tele Cell, the authorised distributor of Oppo phones has also launched different models of mid-range smartphones in recent months. The company launched Oppo F7 Youth, Oppo A83 2018 and A71 2018 in recent months. According to Suraj Maharjan, public relations Head at Oppo Nepal, Oppo F7 Youth has been designed specifically to target college students.

The company plans to launch more mid-range and budget smartphones in Nepal soon and even hinted at a possible launch of a flagship Oppo smartphone.