Home » NEWS » 25 million SMS sent throughout this Dashain in Nepal

25 million SMS sent throughout this Dashain in Nepal 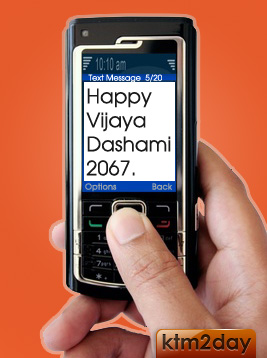 This festive season has seen a rapid surge in the number of festival greetings being sent to relatives and friends through Short Message Service (SMS). More than 25 million SMS were recorded to have been sent during the 10-day festival season.

“From the day of Ghatasthapana to Dashami Nepal Telecom´s (NT) mobile phone users have sent 21 million SMS,” said Surendra Thike, spokesperson of Nepal Telecom. According to Thike, there has been a drastic increase in the number of SMS this festive season in comparison to last year.

The festive schemes announced by telecom service providers such as Nepal Telecom, Spice Nepal (Ncell) and United Telecom (UTL) are one of the major factors contributing towards the increase in the number of SMS. On the occasion of Dashain and Tihar, NT is charging 50 paisa per SMS (exclusive of tax) and UTL is charging only 30 paisa per SMS.

“The discount offer we have introduced during the festival season has helped in boosting up the SMS greetings,” said Chief Executive Officer (CEO) of Ncell Pasi Koistine. Under its scheme, Ncell has offered 50 free SMS to customers purchasing Ncell´s SIM card.

Over a period of time, SMS has emerged as one of the convenient, speedy and economical ways of sending festive greetings and is greatly replacing the trend of sending festival greeting cards.

Amid the increased number of SMS sent this festive season, customers, however, have complained of untimely delivery of messages and some had to send their SMS more than twice.

Telecom on the other hand said that SMS are delivered after being sent once though it may take some time and customers are not required to send more than once.(Source:Republica)