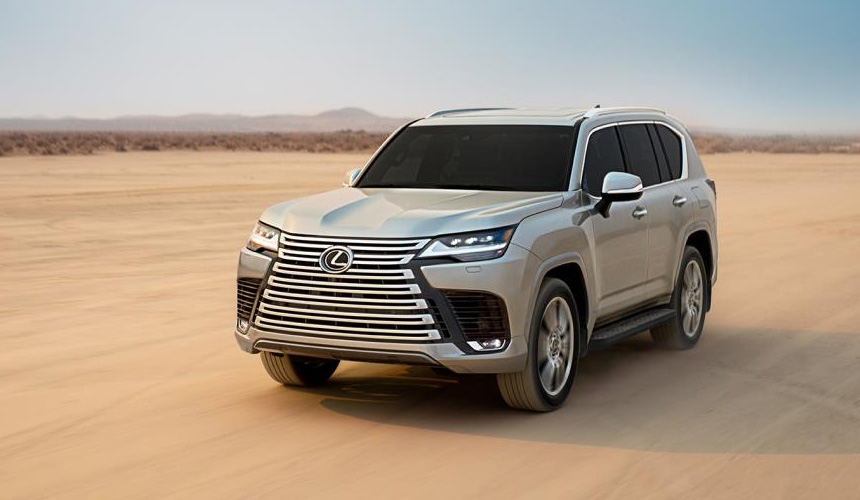 The Toyota Land Cruiser SUV was replaced by its more expensive sibling after it was discontinued. Furthermore, the new Lexus LX is unveiled in Saudi Arabia, the United Arab Emirates, and Russia all at the same time. 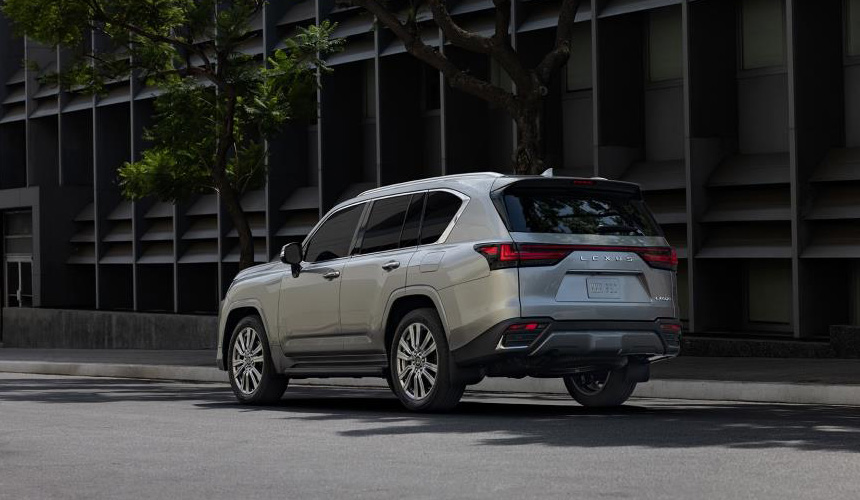 The Lexus LX is, as before, closely associated with the Toyota Land Cruiser 300. They’re built on the same chassis, drivetrain, and even have the same 2850mm wheelbase as the previous model. Ground clearance (225 mm), as well as the entry and exit angles, are all retained. The roof panel and most of the new body are composed of aluminum. The body’s frame has been made lighter by 200 kg, keeping pace with the Land Cruiser. The largest possible wheel diameter is now 22 inches rather than 21. 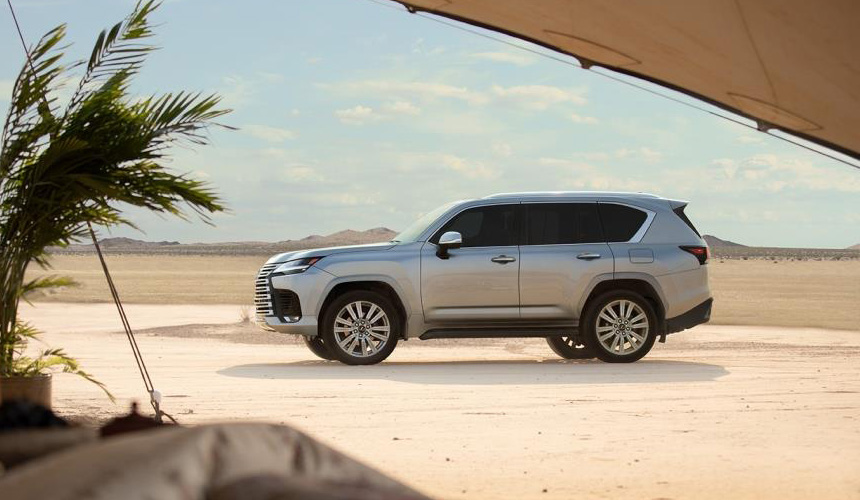 In much the same way as before, Lexus’ front and rear end designs are distinctive, as are the shapes of the rear windows. However, the body design has changed as well: although the Land Cruiser has a nearly vertical fifth door, the Lexus has back pillars and glass that are positioned at an angle. The BladeScan AHS adaptive control system, which is already used in the brand’s passenger cars, has been added to the LED headlights. This technology uses two rotating mirrors to improve the accuracy and speed with which the light beam adapts. 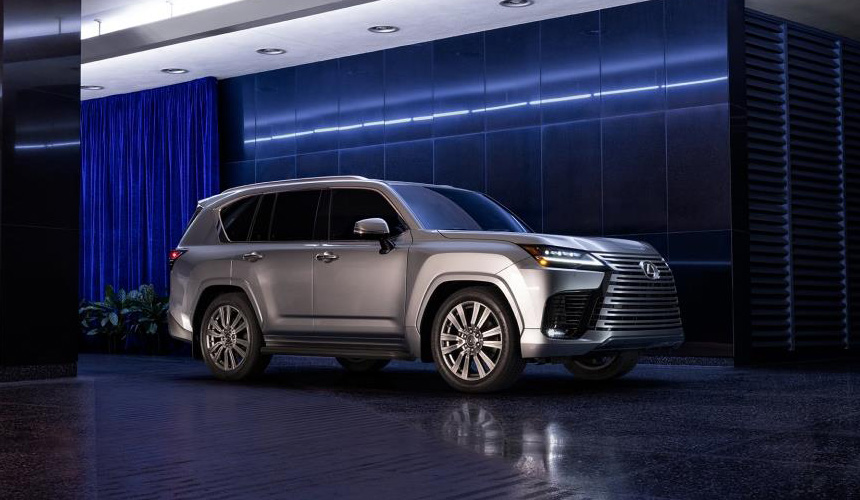 Lexus’ interior is all-new, however, the dashboard design with the two screens in the center is remarkably similar to that of the Infiniti. The media system, vehicle settings, and navigation are all controlled by the 12.3-inch screen on top. The climate control and driving modes are managed via the seven-inch touchscreen on the vehicle’s lower fascia. 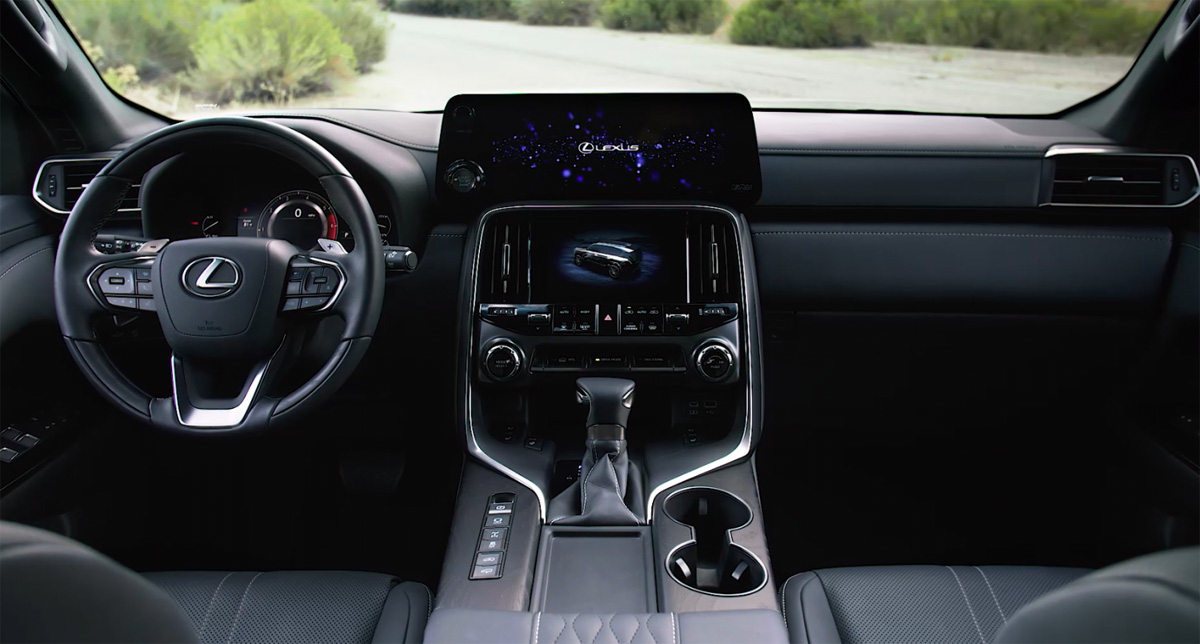 The Lexus LX, of course, has cameras all around. Also, the Multi-Terrain Monitor System, which uses cameras mounted on the underside of the vehicle, can show a live image of what’s going on underneath. Basic equipment on this Land Cruiser includes a fingerprint engine start system, one of several available options. There are 25 speakers from Mark Levinson audio system. 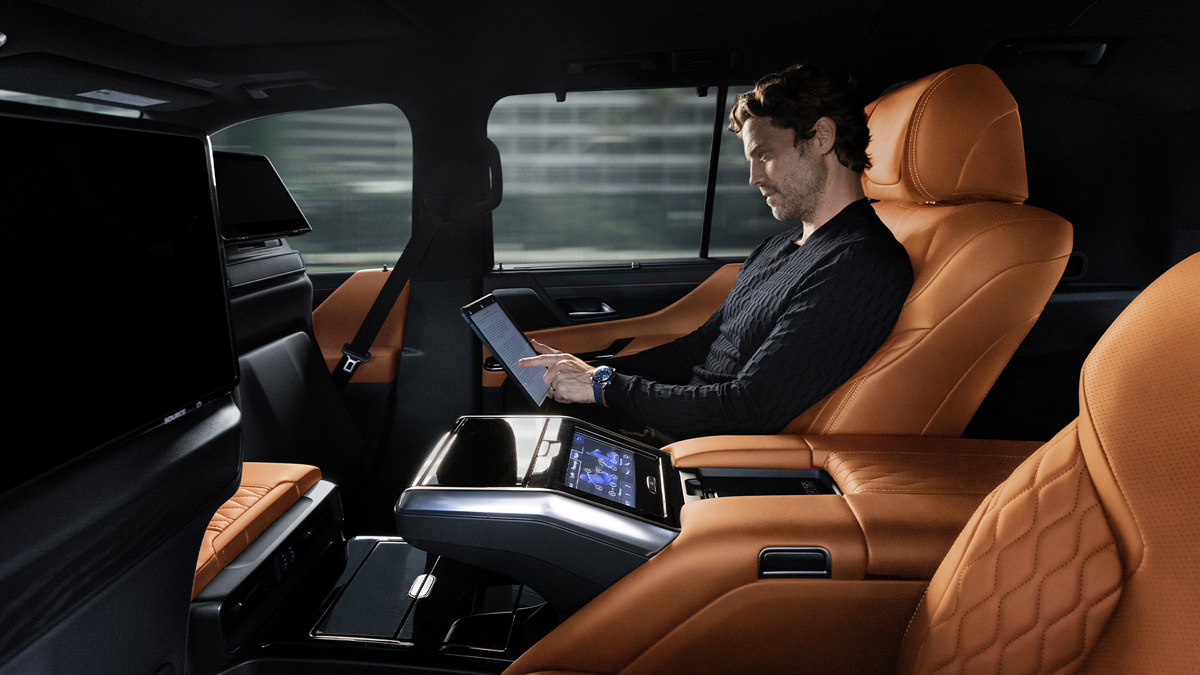 The VIP model, which features a four-seat saloon, has replaced the top-of-the-line model. Separate adjustable seats in the back row have backs that can be folded down to a possible angle of 48 degrees. In addition to having a retractable footrest for the right-side passenger, the vehicle’s 1100 mm row separation is made possible by folding the right front seat. An additional touch screen display, media screens, and additional ceiling vents can be found in the VIP cabin. 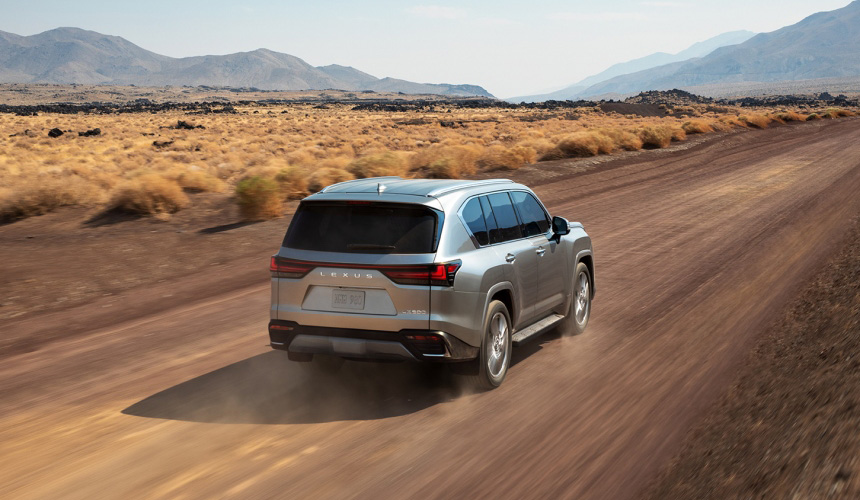 The Lexus LX retains its hydraulic suspension, which allows the car’s height to be adjusted even while the ground clearance remains constant. This is due to the fact that the chassis’ continuous rear axle on four rods is still present. Adaptive dampers are now integrated in both the rear and front of the vehicle, increasing the lift and lower speed of the body. The 145 mm of rebound travel has been extended by 20 mm. The suspension is firmer and the Torsen limited-slip rear differential is included in the F Sport model. 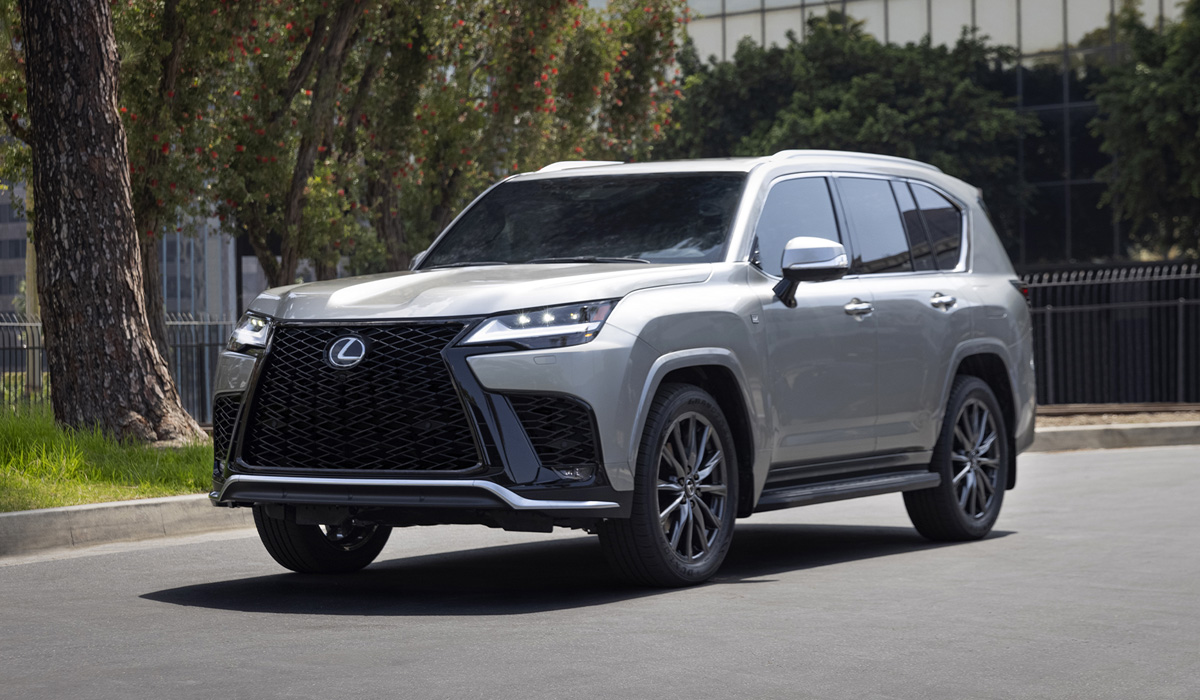 The all-new Lexus LX is expected to be launched in a few months and will be much more expensive than the outgoing model, which already costs at least US $ 110,680, according to the price list. 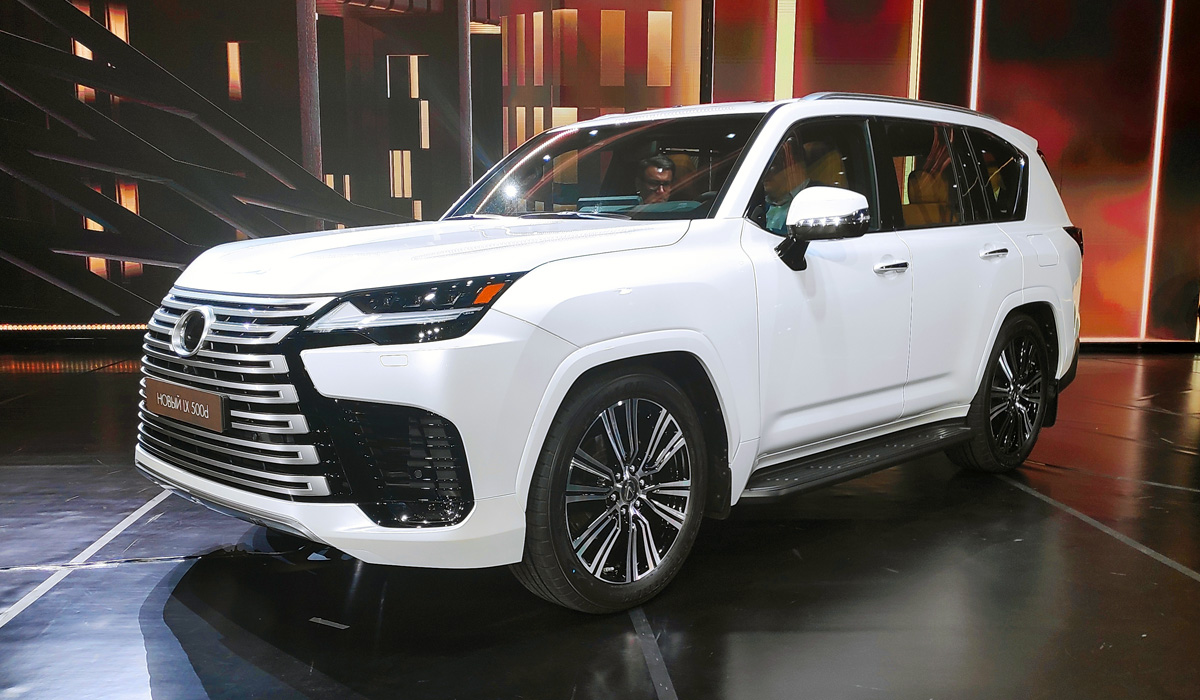 The production of cars for the global market should begin in December, and the dealers are expected to have them in February 2022, although due to a shortage of microchips, these dates may shift. 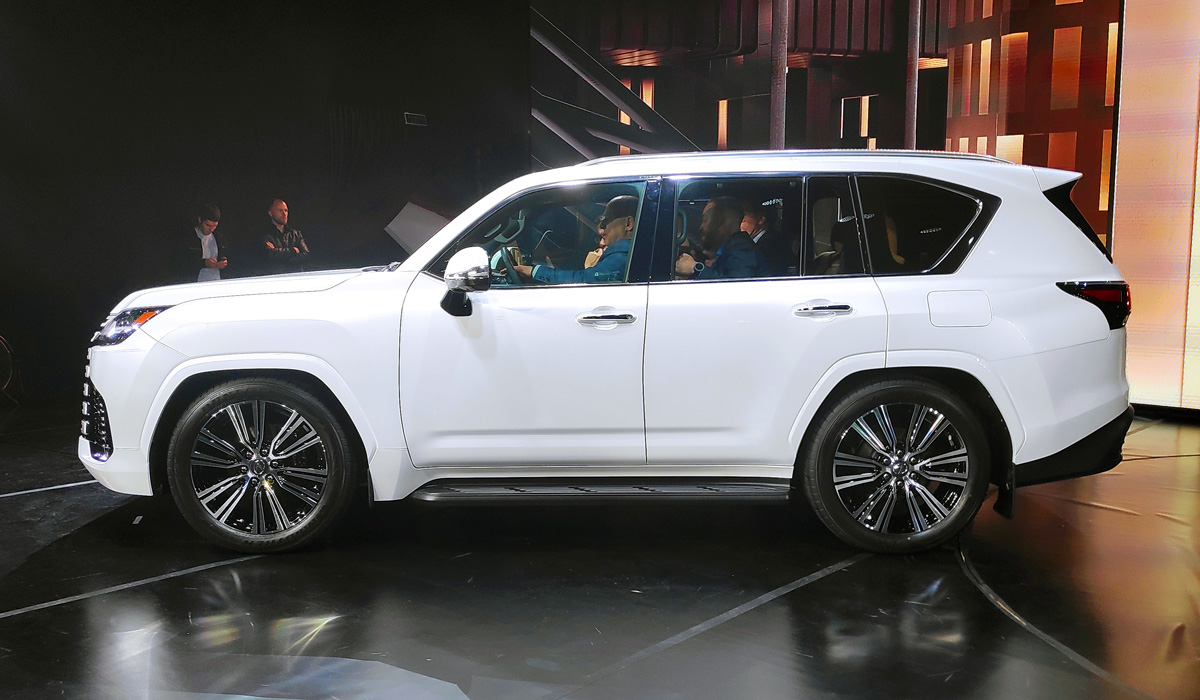 The Lexus LX has hardly changed in size. The side steps are rigidly installed: no electric drive 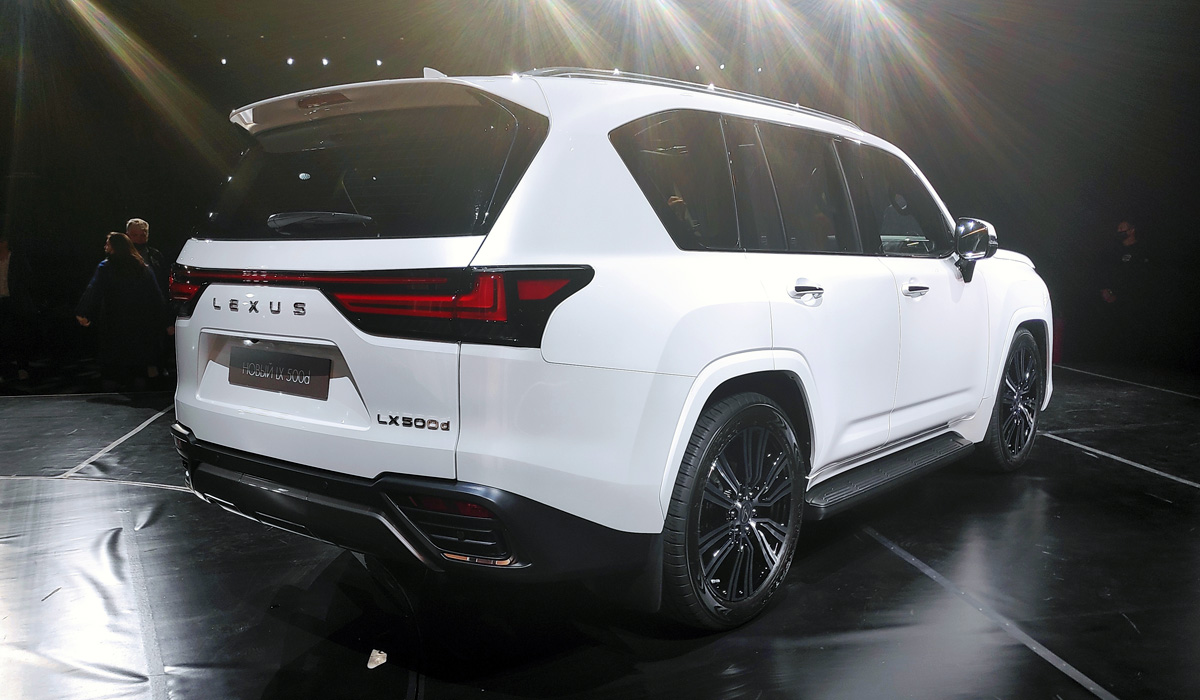 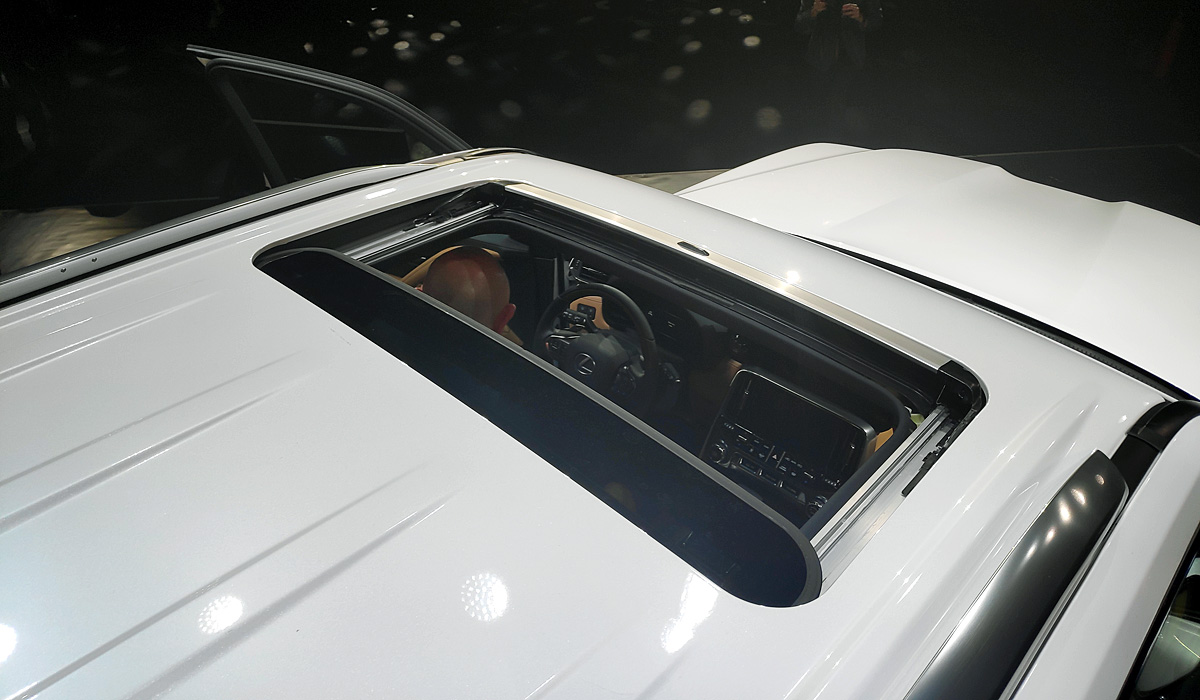 Lexus still does not have a full panoramic roof, only an ordinary sunroof 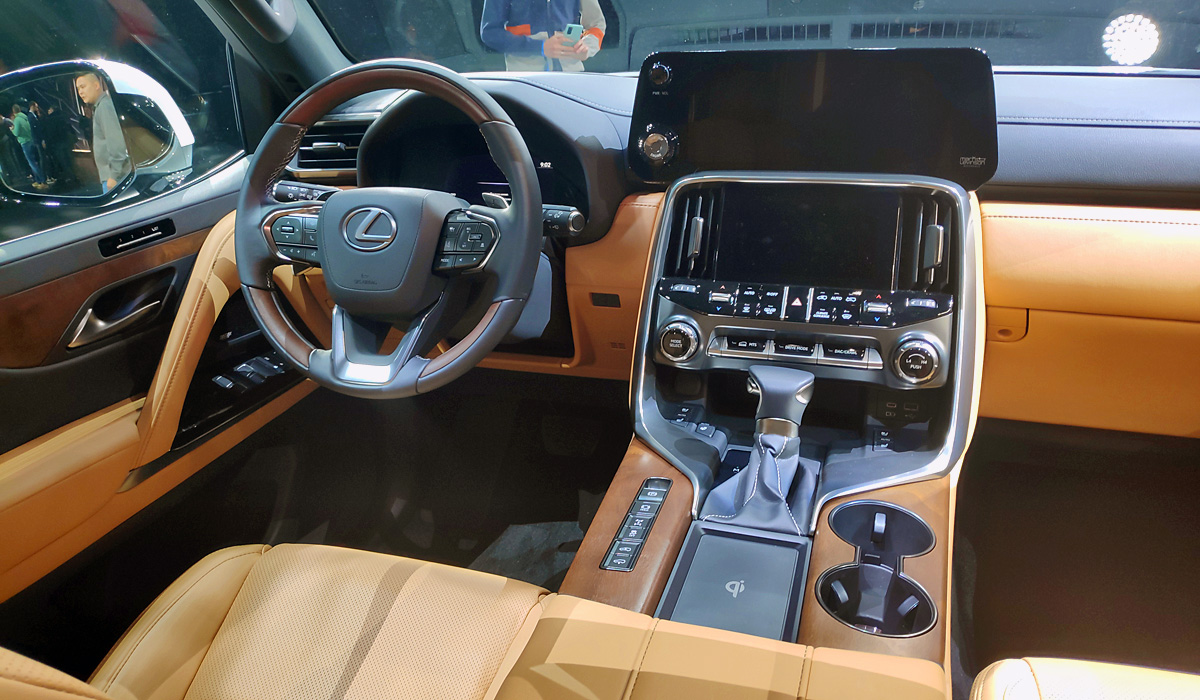 The quality of the finish is decent, but there is no feeling of spaciousness in this cabin: the space is concealed by a wide central console. 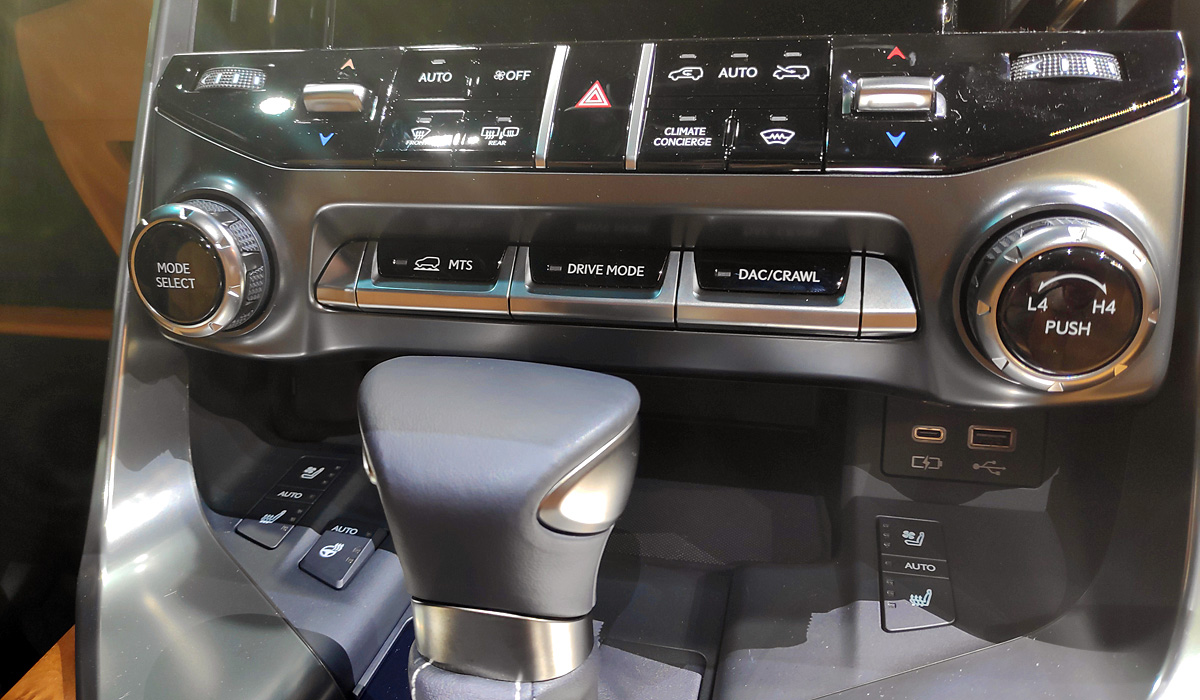 The buttons and switches on the center console are analogue. The lower row is responsible for managing the driving modes and off-road features: as before, there is a downshift and “creeping” cruise control 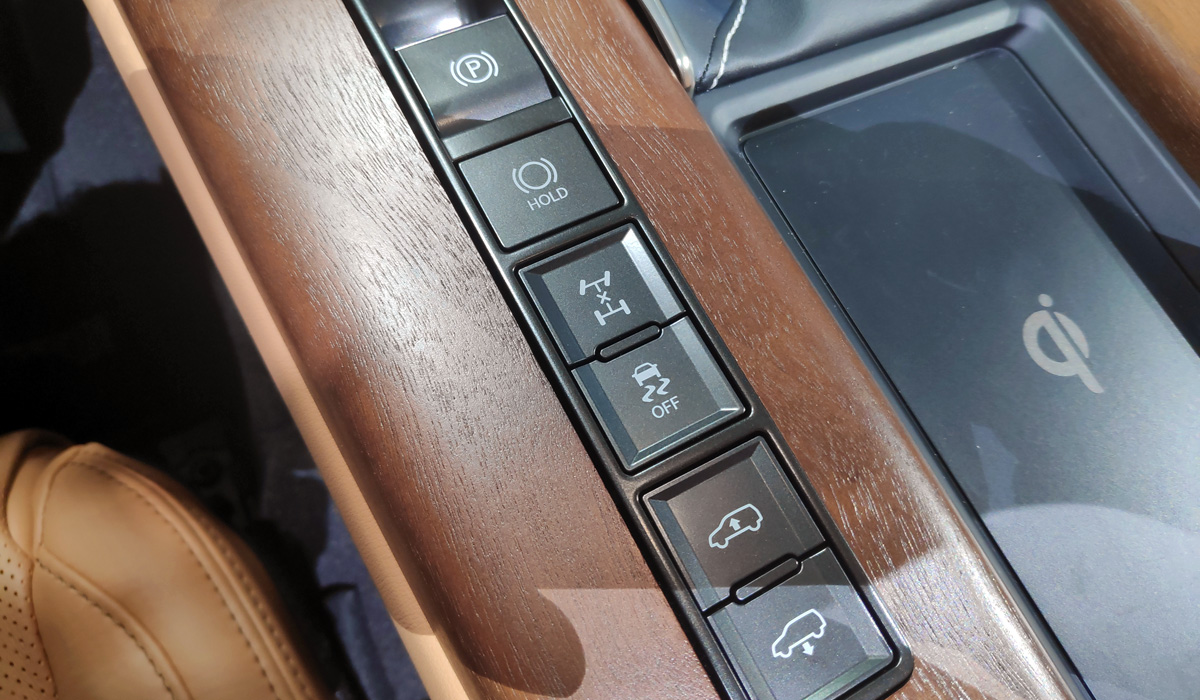 The center differential lock is already “in the base” and is activated by a button on the central console. Cross-wheel locks (both rear and front) will be in premium versions 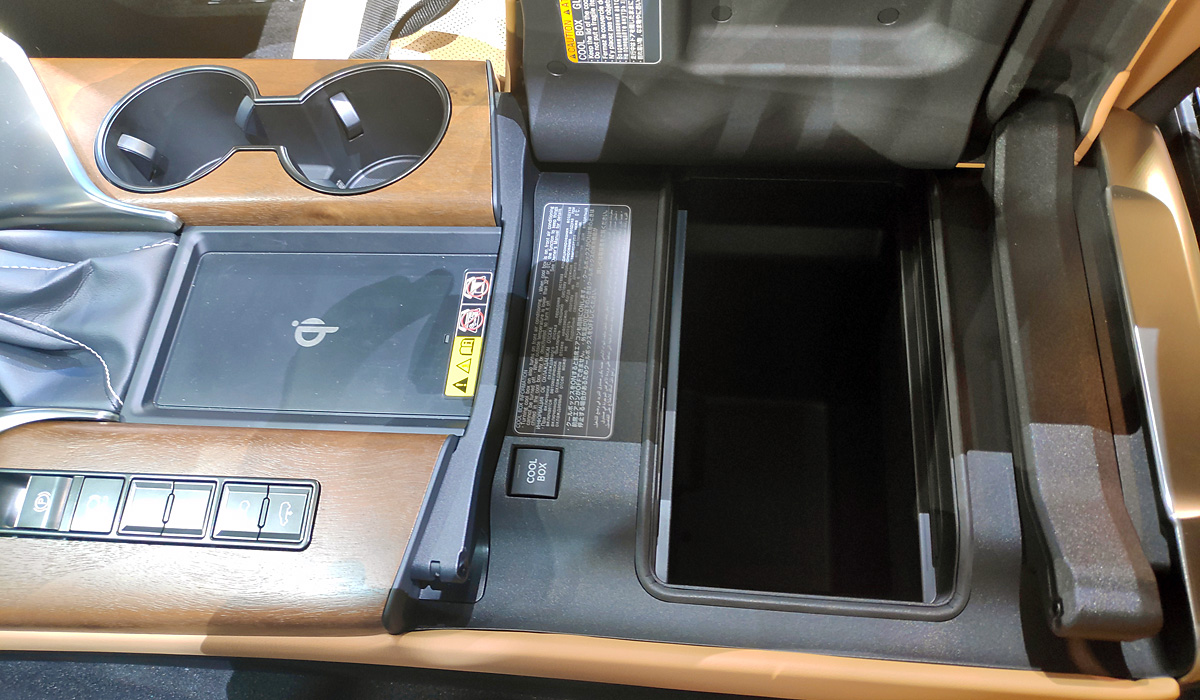 The center armrest cover can be opened to the left or right, underneath is a refrigerated box 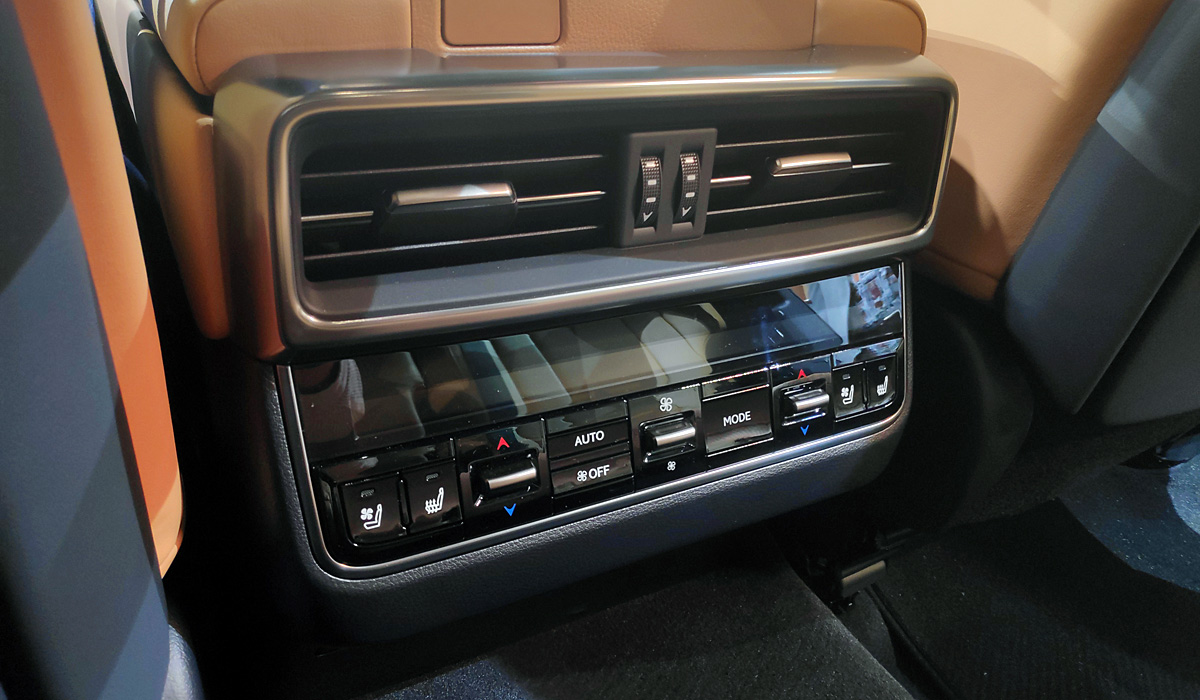 For passengers in the second row – separate climate control, heated and ventilated seats. The third row is an option for gasoline cars, although it should later appear on diesel versions as well. 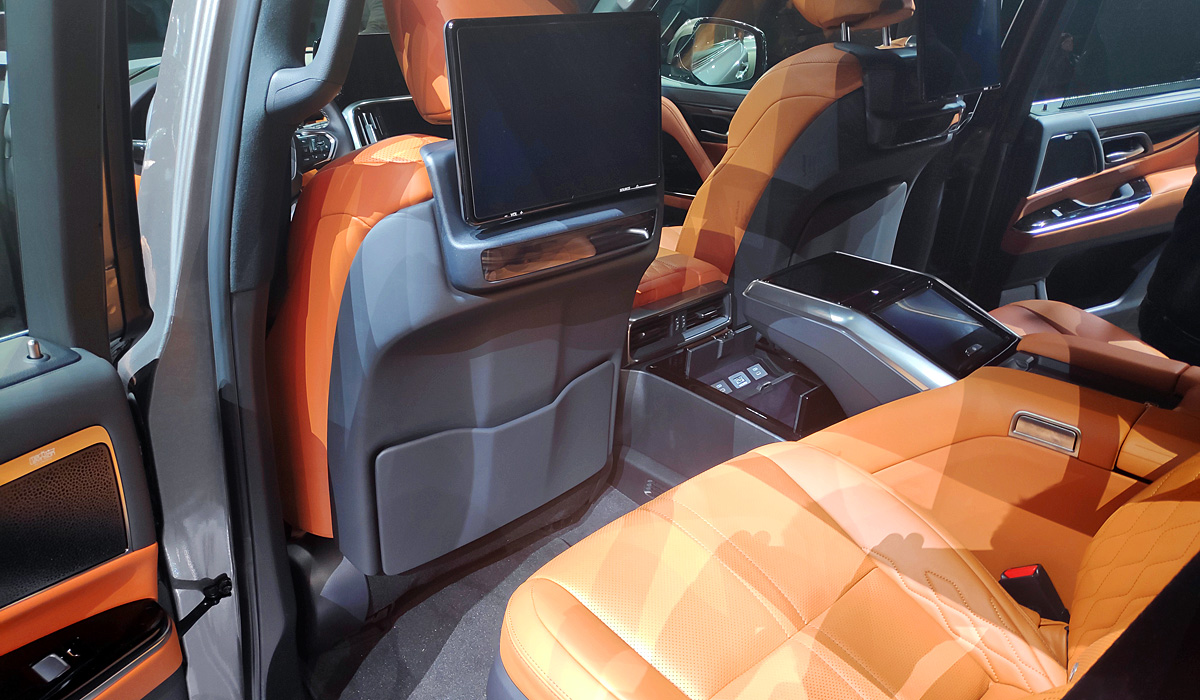 The top version of the VIP has climate control and seat controls integrated into the central touchscreen. There is no longitudinal adjustment in the rear seats, so there is not much space behind the tall driver.