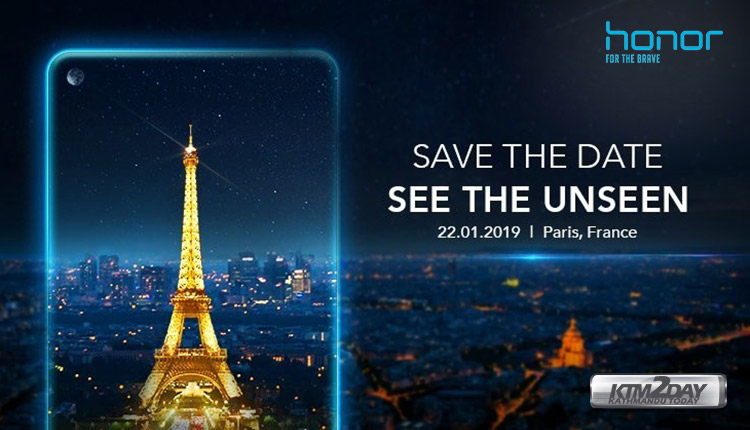 Smartphone makers giant Samsung and Huawei are on a race to launch the next big thing in smartphone technology – the in-display camera .

Both companies are fighting head to head to be the first to unveil this feature and it seems Samsung has already got the lead with Galaxy A8s which will be launched on Dec 10.

Huawei on the other hand is set to launch its first in-display smartphone – the Nova 4 a week later i.e. on Dec 17.

Honor brand , the subsidiary of Huawei has scheduled an event in Paris on Jan 22,2019 to unveil its Honor View 10 successor, the Honor View 20 smartphone which will also feature the in-display camera technology.

The details regarding Honor‘s event where first tweeted by company’s French division, and the teaser image claims “See the Unseen”.

Huawei and Honor share technologies and while Huawei does focus on mainstream segment, Honor is focused on the entry and premium mid-range smartphone segment. Now, it seems like the company is ready to go against the Nova 4 with Honor View20. There is not much known about the smartphone but reports claim that it will feature a Full HD+ display with a screen-to-body ratio of over 92 percent.

While it is expected to be radically different from the front with an in-screen camera, it is expected to borrow design elements of its Huawei siblings for overall form factor. There are reports indicating that Honor View 20will feature a triple-camera setup stacked vertically like the one on Huawei P20 Pro. It will be powered by Kirin 980 SoC, the flagship 7nm chipset developed in house by the Chinese smartphone maker.

There is a possibility that Honor View20 will also feature an in-display fingerprint sensor, making it one of the first devices to have both the fingerprint sensor as well as the selfie camera under the screen. It should have at least 6GB of RAM, but Honor might offer an 8GB RAM variant as well to be aggressive in the premium mid-range segment. We are likely to hear more about the device in the coming weeks and Honor will bring this device instead of Honor Magic 2 to India.