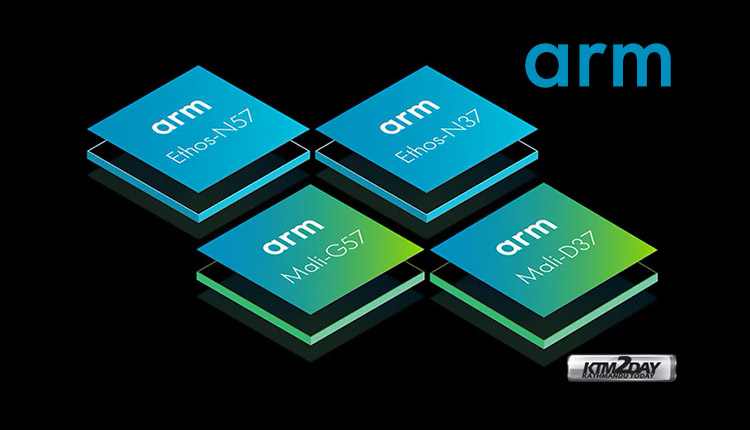 ARM introduced four new products all at once. These are Ethos machine learning processors that complement the existing N77 model with simpler N57s and N37s; the first mid-range graphics accelerator on Valhall’s brand-new architecture in the face of the new Mali-G57; Mali-D37 display processor.

Ethos neuroprocessors
ARM first spoke about its new neuroprocessors (NUs) early last year under the name Project Trillium. This year at the TechCon conference, the company officially introduced these products under the market name Ethos, and the N77 became the first representative of the family. 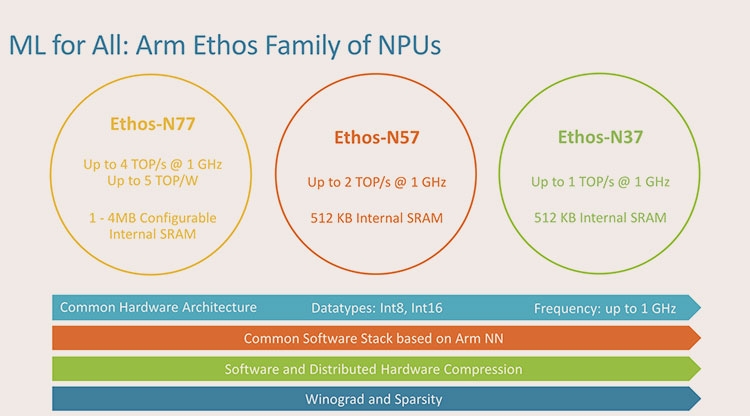 The company has now announced that the Ethos N77 could be equipped with SRAM storage capacity of 1 to 4Mbytes, although last year it was reported that the maximum volume would be only 1Mbyte. ARM explained that manufacturers needed additional memory to work machine learning algorithms effectively. The flagship NPU delivers a maximum theoretical performance of about 4 TOPS at 1 GHz, with an efficiency of 5 TOPS/W. 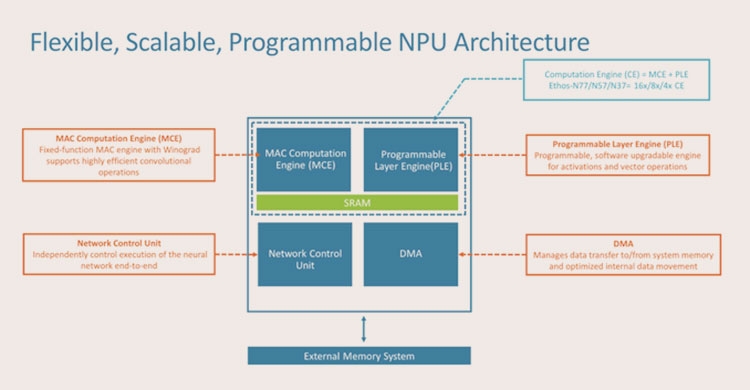 All members of the Ethos family essentially come from the same building blocks. All NIs use the same MAC (MCE, MAC computation engine) and programmable layer engine. MCE consists of 128 MAC blocks and works in conjunction with PLE. MCE, PLE and SRAM memory blocks form a block (CE, computation engine) – the number of such blocks is the main difference between the NPU. N77, N57 and N37 include 16, 8 and 4 CE blocks, respectively. 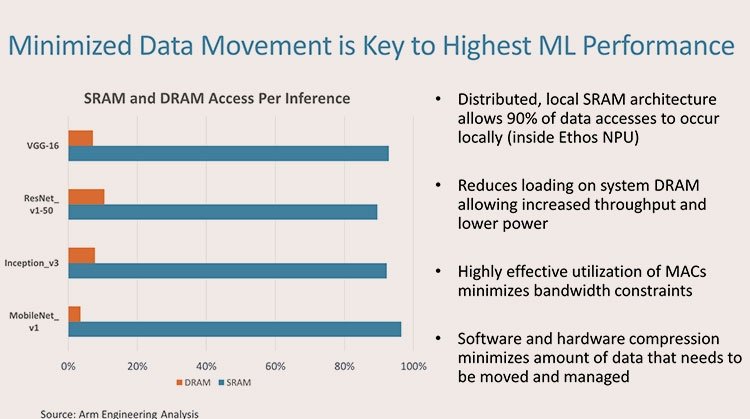 Mid-range and entry-level Ethos options will reach the market much faster than other new ARM designs: the company explains this by the fact that the demand for machine learning technologies in low-cost chips with strict crystal area limitations is unusually high. The appearance of such NPUs in entry-level single-chip systems allows for the implementation of functions such as advanced face recognition in low-cost devices.

The new NPUs are already licensed and used by ARM customers in their designs. 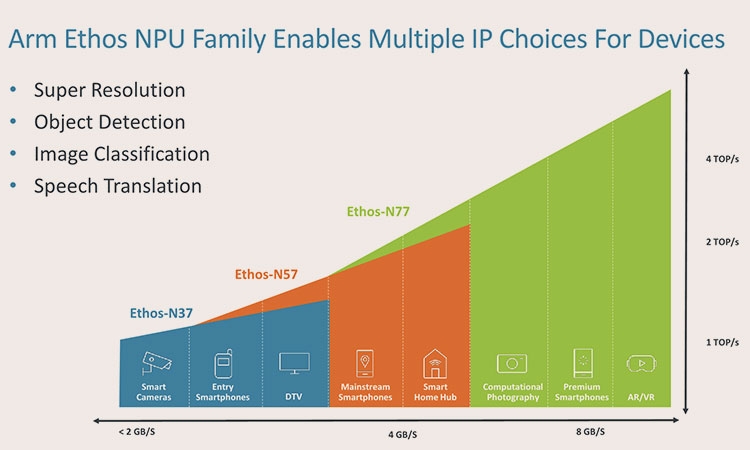 Earlier this year, ARM introduced Valhall’s new graphics architecture with its flagship Mali-G77 accelerator , which we should see in 2020 single-chip systems. The new GPU architecture is a significant departure from previous accelerators of the Bifrost family: the graphics pipeline and computing micro-architecture have been completely redesigned. 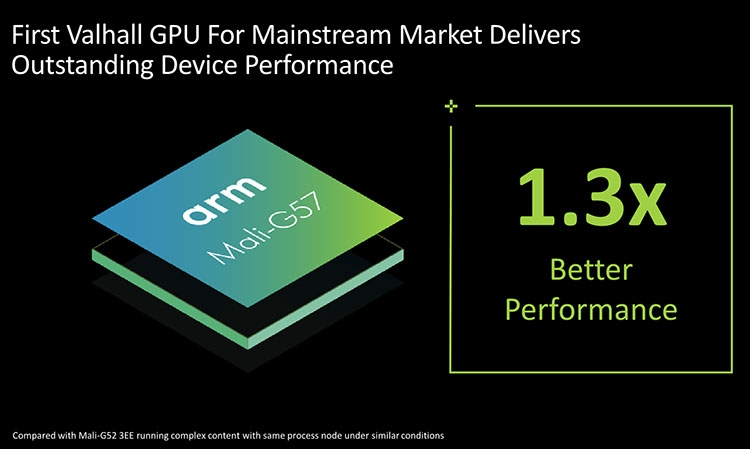 Now ARM has introduced the Mali-G57 accelerator, a version of Valhall for mid-range chips. Currently, the company does not share specific details about what is simplified in the G57, but the solution will be very similar to the Mali-G77 GPU trimmed and reduced in size, similar to the changes in the G52 compared to the G72. 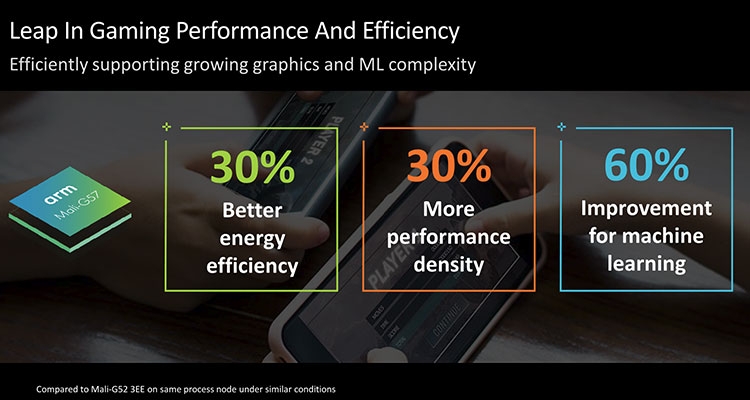 The company promises that the Mali-G57 with three executive engines per core (3EE) in comparison with the G52 in the same configuration will be able to show 30% higher energy efficiency and 30% more efficient use of the crystal area (due to increased productivity). 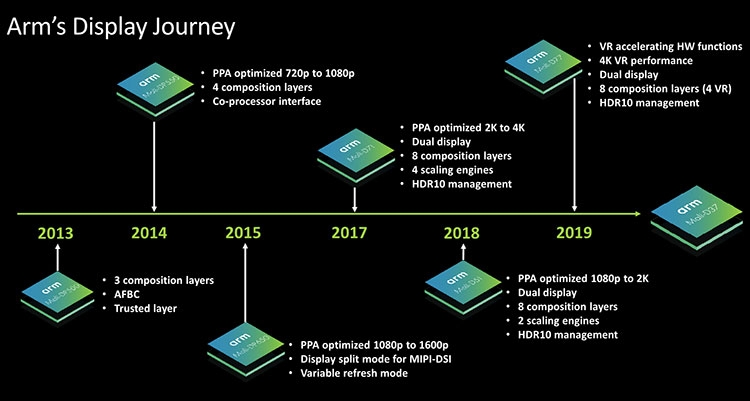 And finally, ARM has launched a new mid-range display processor in the form of the Mali-D37. This solution is based on the Komeda architecture, which was first introduced in Mali-D71 and its next version – the Mali-D77 DPU announced this year . The new D37 display processor is aimed at 2K and Full HD screen resolutions and promises to occupy less than 1 mm² of crystal area in production in compliance with the old 16-nm standards.