According to the latest research from Counterpoint Market Monitor, Global handset profits grew 4% annually in Q2 2018 mainly due to Chinese brands, which were aggressive with their flagship offerings. Their combined profits crossed US$ 2 billion for the first time, contributing to almost a fifth of the total handset profits.

Apple remains the most profitable smartphone brand. iPhone X, which drove a new design language, helped Apple command a significantly higher Average Selling Price (ASP) during the second quarter, at a point when the overall smartphone market was beginning to saturate. 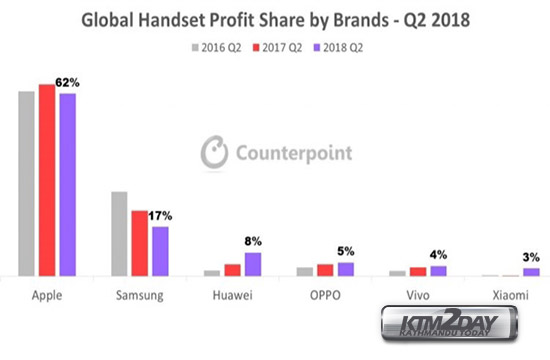 The remaining 1% of total industry profit was distributed among more than 600+ handset brands.

Xiaomi (747%), Huawei (107%), vivo (24%) and OPPO (23%) were the fastest growing smartphone brands in terms of handset profits during Q2 2018.
It it worth to mention that the Indian smartphone market is currently the main battleground for many handset manufacturers from China, Taiwan and South Korea. While smartphone shipments have slowed in many parts of the world, the Indian mobile phone market continues to grow.