First it is important to say that the devices retain much of the design of their predecessors. Except for the ‘notch’, which has now undergone a reduction in its dimensions.

Both models feature major innovations, including the most advanced dual-camera system ever on iPhone — with a new Wide camera with bigger pixels and sensor-shift optical image stabilization (OIS) offering improvements in low-light photos and videos, a new way to personalize the camera with Photographic Styles, and Cinematic mode, which brings a new dimension to video storytelling. No big change, but with major improvements

As expected, the design of the iPhone 13 and iPhone 13 mini has not undergone a radical change, but we do have slight tweaks, among which the flat edges, the elegant aluminum frame and the expected pink color stand out. Of course, the IP68 certification of water and dust resistance is maintained.

The 6.1- and 5.4-inch screens include Ceramic Shield on the front and feature a smaller notch,so the redesigned TrueDepth camera is smaller and the screen surface is larger. In addition, we have a new arrangement of the rear cameras with the lenses aligned diagonally.

At the hardware level, the most important feature is the inclusion of Apple A15 Bionic processor, which promises greater performance, improved graphics capacity and lower energy consumption. This chipset uses a 5-nanometer technology and has almost 15,000 million transistors. According to Apple, the new 16-core Neural Engine is capable of doing 15.8 trillion operations per second and offers faster machine learning computing. Thanks to the A15 Bionic, the iPhone 13 and iPhone 13 mini can boast a photographic section better than ever. In fact, Apple describes it as a “massive leap with advancements in hardware and computational photography that deliver amazing photos and videos.” Let’s see why.

First is the new 12-megapixel angular camera (f/1.6 aperture) with optical displacement stabilization,a novelty previously exclusive to the Pro models. Thanks to the magnification of the lens, it is possible to capture 47% more light, which will be reflected in better photographs. For its part, the wide angle, also 12MP (aperture f / 2.4), is faster thanks to a new sensor. This is capable of offering a field of view of 120 degrees.

Also not to forget, Night mode is now available on all cameras. It also adds compatibility with Smart HDR 4, which boasts improvements in color, contrast and lighting despite not being in the ideal light conditions. And the front camera? The TrueDepth sensor inherits the features of the dual camera, from the Smart HDR 4 to the “Cinematic Mode” that we will explain below.

Surely the biggest feature of the cameras has to do with video capture, which takes an abysmal leap with the new generation. For example, it will be possible to record videos in “Cinematic Mode”, a function that allows you to change the focus from one person to another regardless of whether it is farther away or closer to the camera. Of course, this feature is also available on objects or pets, and has support for recording in Dolby Vision HDR, 4K resolution, and up to 60 frames per second on all cameras.

“Anyone can capture cinema-style moments, even if you’re not a professional filmmaker. For more creative control, the focus can be changed during and after capture, and users can also adjust the bokeh level in the Photos app and iMovie on iOS.

Another of the great new feature is the battery, which is now larger and its autonomy can be extended throughout the day. Apple notes that the battery of the iPhone 13 lasts 2 and a half hours longer than that of the iPhone 12, while the mini model beats its predecessor with an additional 1.5 hours. But beyond increasing the size of this component, the improvements in autonomy are directly related to the energy efficiency of the A15 Bionic processor, in addition to other optimizations that were possible thanks to the excellent integration of software and hardware. 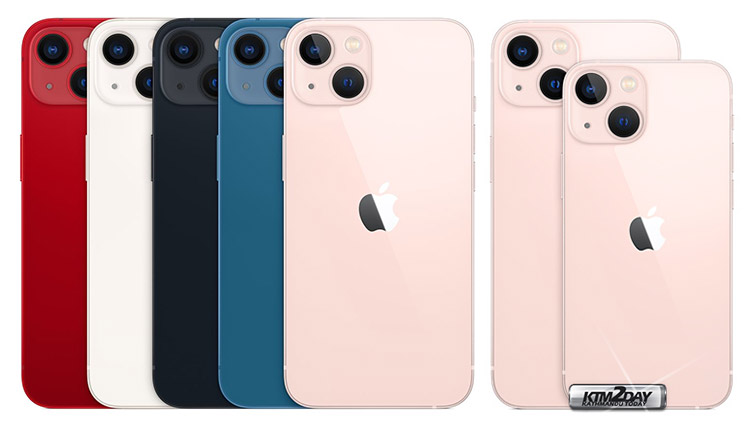 This year, the most basic models will offer 128GB of storage,great news for future buyers. They will be marketed in various configurations depending on the storage and in five colors  – Pink, Blue, Midnight, Star White and (PRODUCT)RED.

In Nepal, pre-orders for the new iPhone-13 variants are now open.According to the company, nine iPhone-13 models have arrived in Nepal.

According to Evolution Trading, Apple’s official distributor in Nepal, pre-ordering for iPhone-13 variants began on October 13.

The prices of iPhone 13 Mini and iPhone 13 are listed below :