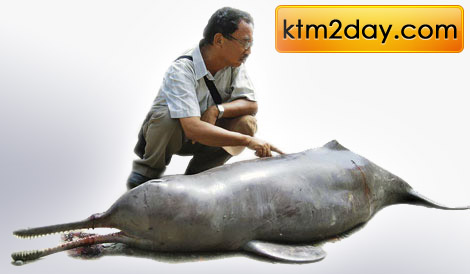 Dr. Bharat Raj Subba, a zoology professor at Post-graduate Campus, Biratnagar, inspects a Gangetic dolphin killed by local fishermen, at District Police Office Morang on Monday. Police seized the dolphin as it was being sold for meat. The dolphin is 6 feet 9 inches long and weighs 83 kg. It was caught in the Koshi river and later killed by local fishermen. The Gangetic dolphin is listed as a critically endangered species by IUCN. According to WWF, less than a dozen such dolphins remain in Nepal.

Dolphins are particularly threatened in the upstream reaches of the smaller tributaries, where populations are often isolated behind barrages and are more vulnerable to human activities because of the reduced habitat area and perhaps the most endangered populations are in Nepal . Although dolphins were once abundant in Nepal throughout the Koshi, Narayani, Karnali and Mahakali rivers and their feeder streams , due to construction of low gated dams across river systems for irrigation and flood control, over exploitation of prey species, illegal killing and wide range of other human disturbances, the populations are more or less restricted to Karnali and Koshi river systems. – WWF NEPAL(May 2006)