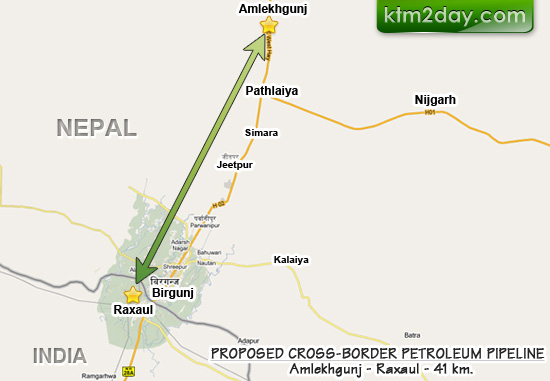 Nepal Oil Corporation (NOC) has geared up steps to finalize technicalities for the construction of the much touted 41-kilometer cross-border petroleum pipeline between Amlekhgunj and Raxaul by the end of this year.

For the purpose, it has decided to hold high-level bilateral talks with the Indian Oil Corporation (IOC) in Mumbai soon. “We have decided to hold further talks with the IOC, NOC´s Indian counterpart, at the chairman-level and aim to finalize the technical details of the project by the end of 2010,” said NOC Managing Director Digambhar Jha. So far, the two petroleum trading partners were holding talks on the matter at managerial level.

Through the talks, NOC hopes to finalize capital investment, technicalities of construction and operations of the pipeline.

The cross-border pipeline project was first proposed by IOC in 1995, however, its implementation has moved at snail pace largely due to skepticism in Nepal over its smooth operations. In recent months, the two governments have agreed at implementing the project under a separate ownership-joint operation model, dropping the previous idea of a joint venture.

If laid, the pipeline is estimated to reduce the fuel transportation cost by 40 percent, something which will greatly relieve the Nepali consumers. It is also expected to generate additional revenue for the government against the use of pipeline, reduce technical loss, oil theft, and road deterioration, besides making supplies cleaner and cheaper.

NOC has long argued that the pipeline will help end fuel shortages.

“We already have assessment of technical and capital requirements for implementing the project. Once the two sides agree on terms and modality of operations, we can kickstart the project,” said Jha.

A detailed project report (DPR) of the pipeline, which IOC carried out recently, has identified that its construction extending 39 kilometers in Nepal and 2 km in India, will cost around Rs 1.60 billion.

The cost has been calculated assuming that the NOC will lay down 10.7 inch diameter pipeline. The figure excludes the cost of land that the NOC might need to acquire for the construction.

Given the money NOC spends to transport fuel via tankers, the DPR says NOC will recover the investment in 20 years.

“Moreover, to assure the smooth operation of the pipeline, IOC has recently agreed that it will extend its pipeline system up to Raxaul from Patna,” said Jha. If that happened, Amlekhgunj-Raxaul pipeline would be connected with the complete network of IOC´s system, including different refineries and ports.

This, Jha said, will enable Nepal to get the supply directly from the IOC refinery in Barauni. “And IOC too will be able to handle the operations by operating a much smaller depot at Raxaul,” said Jha.

This is believed to help IOC cut cost of its depot and also enable Nepal hire its system to bring in the fuel from port, facilitating possible imports from third countries.