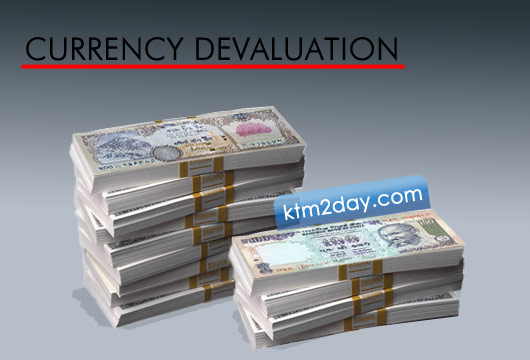 Nepal is considering devaluing its currency because a decades-old peg with the Indian rupee is posing problems for its monetary policy and competitiveness, the central bank governor was quoted as saying.

Yuva Raj Khatiwada, the newly appointed governor, told the Financial Times in a report published on Monday that Nepal needed to reconsider the currency peg “in the medium term” because of the disparity between India’s fast growing economy and that of its landlocked neighbour.

The peg holds the exchange rate at 1.6 Nepali rupees per one Indian rupee.

“We have been overly stressed to maintain the peg,” Khatiwada said, noting that India’s economy was growing at twice the rate of Nepal’s economy.

The governor said that India’s rupee was appreciating because of the country’s economic strength and capital flows.

“Our currency is strengthening just because we have a peg to Indian currency,” the FT quoted the governor as saying.

He said Nepal had no choice but to keep the peg in place in the short term to maintain price stability. He feared rampant speculation if Nepal’s currency, which is fully convertible with the Indian rupee, was allowed to float, the FT said.

At least 60 percent of Nepal’s trade is with India, which is also a big source of worker remittances for Nepal.