According to a new report from McKinsey & Co.’s research arm, global wealth has tripled over the past two decades, making China the richest country in the world.

The report is based on the balance sheets of 10 countries, accounting for more than 60 percent of the world’s gross domestic product. McKinsey Global Institute Zurich partner Jan Mischke told Bloomberg TV that “we are now wealthier than ever before.”

According to a study by McKinsey & Co., the global net worth will reach $514 trillion in 2020, up from $156 trillion in 2000. Almost a third of the increase in the world’s population came from China, which ranked first on the list.

The United States’ net worth grew by more than double to $90 trillion during the same time period. However, the country was unable to outpace China due to a lack of property price growth. 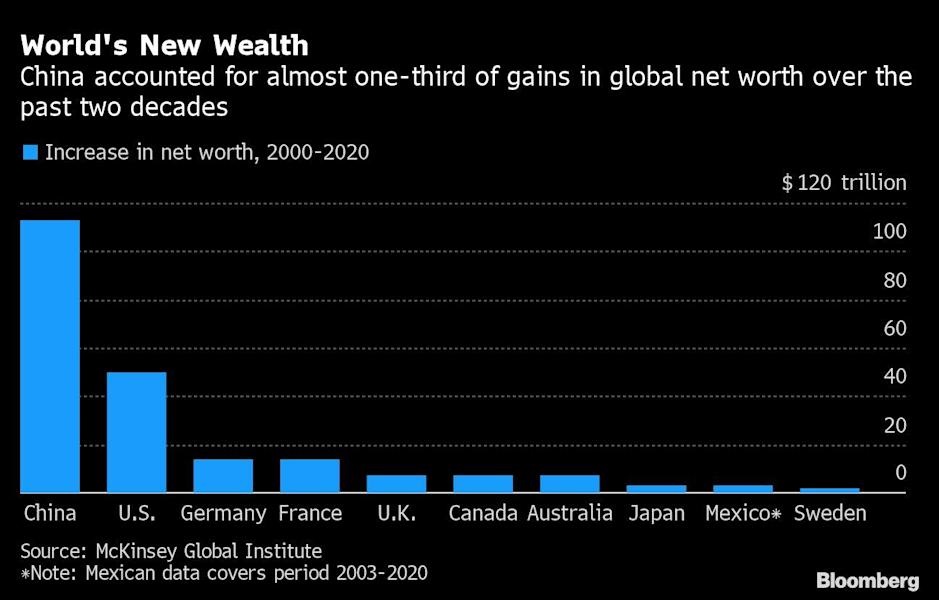 In both China and the United States, the wealthiest 10% of households hold more than two-thirds of the total wealth, according to the McKinsey & Co report cited by Bloomberg.

Global net worth is 68 percent real estate and the rest is held in assets such as infrastructure, machinery, and equipment, according to the report. A small portion of global wealth is made up of intangible assets such as intellectual property and patents.

According to a new report, the richest 1% of the world’s population is increasing their wealth the fastest in 10 countries.

It’s worth noting that financial assets are not included in the global wealth calculation because liabilities effectively offset them.

THE RISK OF GLOBAL WEALTH INCREASE

Net worth rose faster than global GDP over the past two decades, according to a report by McKinsey & Co, which found that property prices have skyrocketed as a result of lower interest rates.

According to the study, asset prices are nearly 50 percent above their long-run average when compared to income. As a result, there are concerns about the long-term viability of the current wealth creation trend.

In an interview with Bloomberg, Jan Mischke raised concerns about the rise in global net worth, citing the role that rising real estate prices have played. There are many ways in which price increases above and beyond inflation raise doubts about a company’s value. When it comes to side effects, it has a wide range.

Because of rising property values, many people are unable to purchase homes. As more people are compelled to take out loans to fund their home purchases, the danger of another housing bubble, such as the one that hit the United States in 2008, is increased.

Chinese real estate prices have fallen and many major property developers have gone into default as recent trends show. The recent scandal involving China’s Evergrande Group serves as a cautionary tale about the dangers of high property prices.

Reports like this suggest that a more purposeful use of the world’s wealth is needed if we are to expand global GDP in a more efficient manner.