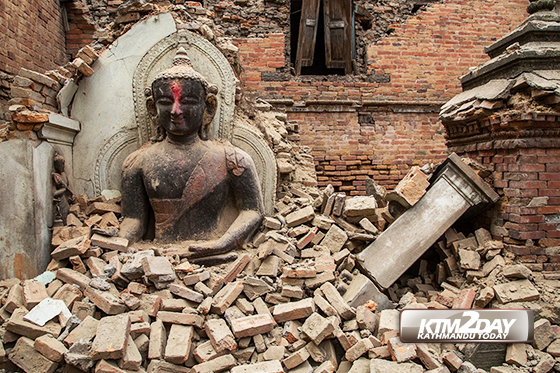 What took moments to flatten will take years to rebuild. In mere seconds, a powerful earthquake devastated a swathe of Nepal.

Rebuilding the impoverished Himalayan nation’s fragile economy will require a long slog, financed by foreign aid and money from its army of overseas workers. Initial estimates peg the economic damage from the temblor that killed more than 5,000 people at billions of dollars. The tourism industry, a pillar of the economy, has been shattered and it’s unclear when the travellers will return.

Their tourism economy has obviously come to a halt,” said Rajiv Biswas, Asia-Pacific economist with IHS.

“I don’t know when it would be realistic for tourists to again visit Nepal.” Biswas forecasts the cost of reconstruction could exceed $5 billion or about 20 per cent of Nepal’s economy.

An initial estimate by the US Geological Service reckons damages of $1 billion to $10 billion. Other analysts say it’s far too early to assess the full cost. Tourism provides seven per cent of Nepal’s jobs and accounts for eight per cent of the economy, according to the Asian Development Bank (ADB).

“I’ve had all my reservations cancelled. I have nil bookings left,” said Hari Man Lama, of Incentive Tours, a travel company in Kathmandu.

“This disaster is going to bring a big loss to the travel industry and to the tens of thousands of people who depend on the tourists for their livelihood.” Last year, nearly 800,000 people visited Nepal, home to eight of the world’s 14 tallest peaks, including 8,848-metre (29,029-foot) Mount Everest, the world’s highest.

The quake, which struck in the middle of the tourist high season, destroyed nearly half of the UNESCO World Heritage Sites in Kathmandu and triggered avalanches on Everest that killed 19. It’s the latest setback for the industry, which suffered two tragedies in 2014. Travellers are cancelling trips as governments issue advisories to stay away.

Those still in the country are scrambling to get home. “Tourists are fleeing because of the continuing aftershocks, which have brought fear and terror,” said Lama. “There’s fear of the spread of disease because of the dead bodies that are still unburied and the lack of water and supplies.”

Last April, the climbing season was cut short when 16 Sherpa guides were killed by an avalanche on Everest. In October, nearly four dozen foreign trekkers, guides and villagers were killed by snow storms and avalanches that swept the Annapurna region. Three of the seven World Heritage Sites in the Kathmandu Valley have been severely damaged, including Durbar Square with pagodas and temples dating from the 15th to 18th centuries, according to UNESCO, the United Nations cultural agency.

“The damage to these cultural landmarks will have a significant economic impact,” said Alok Bohara, head of University of New Mexico’s Nepal Study Centre. He said similar cultural rebuilding was carried out after another major earthquake struck in 1934, and it could be done again by master artisans provided they’re given enough resources.

“This is utterly vital because not only the whole Valley economy depends on these cultural icons, but it will affect many other tourism-related economic activities all across Nepal,” Bohara said. The economic fallout is concentrated in the densely populated Kathmandu Valley. The damage has been severe because so many homes were flimsily constructed. “It’s going to be difficult for a developing country to overcome,” said Mark Skidmore, a Michigan State University economist who studies natural disasters.

Haiti is still floundering five years after an earthquake killed more than 300,000. The Nepal government is ill-equipped to handle relief efforts. The country is deeply divided along ethnic and political lines nearly a decade after a bloody Maoist insurgency ended with a 2006 peace accord.

Nepal ranks as the world’s 126th most-corrupt country out of 174 in a report by anti-corruption advocacy group Transparency International.

The United Nations ranks it 145th out of 187 countries in its Human Development Index, with annual per capita income of just $712.

Rebuilding ‘will all have to be pretty much funded by other countries’ and institutions, said Biswas of IHS. The ADB has already granted $3 million for immediate relief and pledged another $200 million for the first phase of reconstruction.

The United Nations has appealed for $415 million for essential needs over the next three months. Many families will be leaning more heavily on money sent home from the 2.2 million Nepalis working overseas, mainly in service and construction jobs across Asia and the Middle East. Last year, the country received about $5.9 billion in remittances from migrant workers.

Prasupatee Chaudai, who has been working as a security guard in Hong Kong since 2009, said his family in Kathmandu survived the quake without serious injury but it destroyed their house, leaving his parents, sister and a niece homeless. “I’m very worried,” said Chaudai, who earns 17,300 Hong Kong dollars ($2,200) and usually sends 1,000 Hong Kong dollars ($130) home each month. Now, that won’t be enough but Chaudai, 29, said he can’t afford to send more because he’s got a wife and three children to support.

Sony Newar, a restaurant worker in Hong Kong, said her husband’s relatives in Kathmandu were unaffected but she wanted to donate money to help others in need. “A few drops of water make an ocean, so if everybody will collect the money it will help them,” she said.