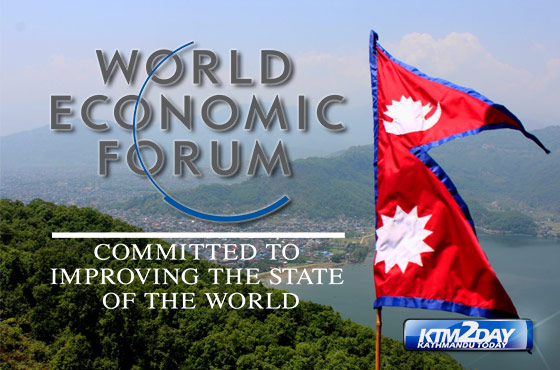 Nepal has inched up five notches to 22nd position in the 2018 Inclusive Development Index (IDI) of World Economic Forum (WEF) among 74 emerging economies.

Nepal, which was ranked 27th in last year’s report, showed a remarkable improvement over the last five years in the index which is an annual assessment of economic performance of 103 countries — 29 advanced and 74 emerging economies. The index measures how countries perform on eleven dimensions of economic progress in addition to GDP.

According to the IDI, Nepal scored 4.15 out of 7 in the IDI 2018. Higher the value in the ranking, the better is the performance. There was 8.53 percent jump in the score in 2018 ranking if compared to the five-year trend of IDI, according to the WEO report.

Nepal tops the ranking in South Asia. Among South Asian countries, included in the Index, Bangladesh, Sri Lanka and Pakistan are ranked 34th, 40th, and 47th, while India is at the 62nd position. Even China — the rising superpower – is ranked 26th.

Kathmandu to get rid of tangled wires with underground cable…

Luthinia is at the top of the list of emerging economies in the ranking, while Mozambique remained at the bottom, according to the report. Norway is the best performing advanced economy in 2018.

The ranking of the WEF in the IDI are based on three pillars — growth and development, inclusion, and intergenerational equity. The report also shows that Nepal is rapidly advancing in the ranking. Ranking in GDP per capita and labor productivity toward growth, and development indicator is toward the bottom, while healthy life expectancy score is at the middle and employment is at the top.

Nepal seemed to be faring not so well toward inclusion indicator as net income Gini, poverty rate, wealth Gini and median income remained somewhere in the middle of the ranking. 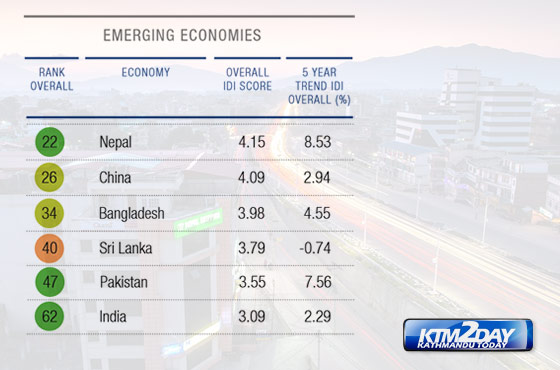 The five-year trend shows that Nepal has been making a remarkable improvement in net income Gini (-3.8), poverty rate (declining to 24.6 percent), and adjusted net savings (up by 7.2 percent). Similarly, public debt ratio has gone down by 6.7 percent, dependency ratio has fallen to 8.1 percent, both showing impressive progress over the five-year period.

However, employment rate is falling at a very slow pace (0.8 percent) in five years, shows the report. The five-year trend shows that GDP per capita grew by mere 2.4 percent and health life expectancy inched up only 1 percent.

Labor productivity growth of Nepal is up by 0.9 percent while wealth Gini index is up by 2.4 in five years, according to the report.