Return of a Legend : World Debut of 2020 Toyota Supra Toyota has finally unveiled its new sports car at the Detroit Motor Show. The fifth generation of the Toyota Supra, is the first product of Gazoo Racing(GR) and its official name is Toyota GR Supra. It will be on sale in Europe from the end of this summer.

Toyota says that the design of the new GR Supra takes inspiration from the 2000GT, with its long bonnet, compact body and also from the previous generation of Supra, especially in the appearance of the front and rear wheel arches , integrated spoiler, etc. It is the first GR global model, and has been designed with BMW as a sporty two-seater rear-wheel drive and six-cylinder front engine, with 340 hp of power and 500 Nm of maximum torque.

This 3.0-liter six-cylinder inline engine has a twin-scroll turbo and is associated with an eight-speed automatic transmission that has short ratios in the first gears for greater acceleration and launch control program that facilitates acceleration from 0 to 100 km in just 4.3 seconds . The model offers two driving modes, Normal and Sport , which alter the response and sound of the engine, shock absorbers, steering or differential operation. The stability control, on the other hand, has a “track” setting that reduces the intervention of the same and is more permissive.

The body color palette will have eight options, including red, yellow and blue, plus a stormy gray for certain special editions.

The model hides a McPherson-type front suspension and a five-arm rear axle, as well as an electric steering with a sports tuning and a brake system consisting of Brembo calipers of four-piston calipers. 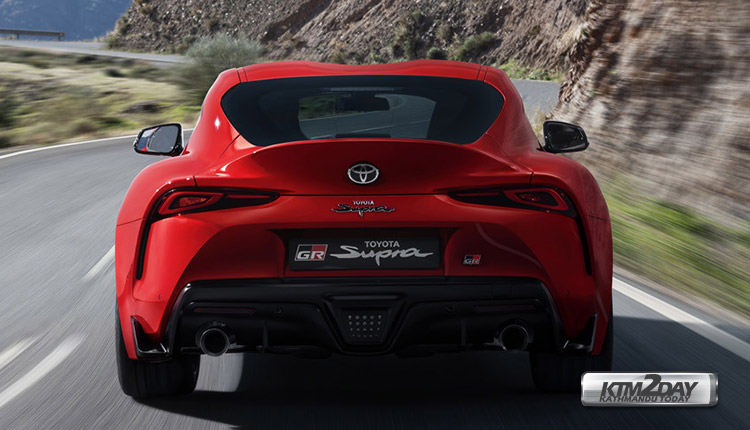 The GR Supra is offered in two versions , Active and Premium , both with a 3.0-liter six-cylinder engine. The most basic will be equipped as standard with the active differential, forged 19-inch wheels, variable adaptive suspension , dual-zone air conditioning, adaptive cruise control with Stop & Go, keyless access and start, leather steering wheel, adaptive LED headlights, camera reverse and a rain sensor.