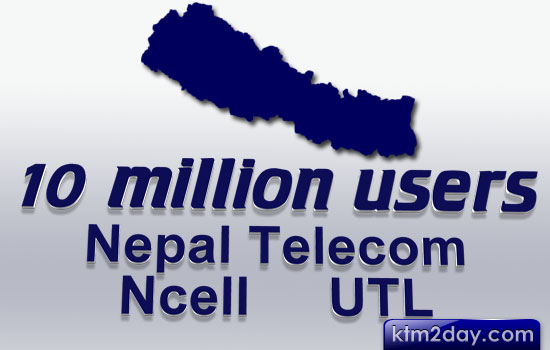 Latest figures with all telecom companies in the country show that the number of subscribers crossed the magical figure of 10 million by mid-November.

With the subscriber base crossing the 10 million mark, over 35 percent of the population now has access to telecom service. This also speaks of the giant stride made by the telecom sector in Nepal amid the political turmoil. All the 3,915 Village Development Committees in the country now have been connected via telephone. It took the country nearly a century to achieve this milestone. However, the actual expansion of the country’s telecom service took place once the GSM mobile service was introduced in 1999 by the state-owned Nepal Telecom (NT). The rapid expansion of the mobile service was instrumental in bringing about the overall growth of the telecom sector. Of the total subscription base, GSM mobile has the largest market share. Both government and private players have contributed to Nepal’s success in the telecom sector. NT, the largest player in the domestic market, led the way and private players followed suit.

NT succeeded in expanding the telecom service and infrastructure to all parts of the country, while the private players played a key role in making telecom service affordable to common people.

The entry of private players like Ncell, United Telecom and others not only accelerated the expansion but reduced tariff and introduced new value added services. Such is the expansion: the country is adding 300,000 subscribers each month. “The number of subscribers has been growing by 300,000 every month,” said Sandeep Adhikari, assistant director at the Nepal Telecommunications Authority. “It clearly reveals that the total number has crossed 10 million by mid-November. As of mid-October, there were 9.92 million telephone subscribers in the country.” According to the Nepal Telecommunications Authority, the penetration rate is 35.37 percent of the total population as of mid-October. The penetration of mobile service alone is 30.61 percent. Of the six telecom service operators in the country, Nepal Telecom is the largest with a subscriber base of 5.65 million including 4.89 million mobile users as of mid-October. Ncell, the first private sector GSM mobile operator, has nearly 4 million subscribers. Ncell that appeared on the scene in 2005 is aggressively reducing the gap between it and the NT. It said it was adding around 200,000 new customers each month.

United Telecom that offers CDMA based telecom service has 542,676 subscribers. According to Adhikari, Nepal Satellite and Smart Telecom have 64,957 and 9,199 subscribers respectively. There are 4,968 users of STM’s telecom service and 1,742 users of other services like GMPCS in the country.

According to a report, if a country provides telecom service to 10 out of every 100 people, it contributes 0.8 percent to the GDP. “Increased purchasing power of the people, competition among telecom operators and cheaper technology are some of the major contributors to the growth,” said Ananda Raj Khanal, director of the Nepal Telecommunications Authority. “The competition is expected to increase until telephones reach 50 to 60 percent of the total population, which will be achieved within the next two years.”

The surge in the subscription is all set to continue as two major players NT and Ncell have already announced their investment plans. NT is planning to add 5 million GSM subscribers in near future. Its closest competitor Ncell has already declared to invest US$ 100 million next year for the infrastructure expansion.

The expansion of telecom service has also opened new avenues for banking sector.

Some of the commercial banks are already in to mobile commerce while some are about to launch. Bankers say expansion of telecom service has opened new a medium for them to reach out to those areas that weren’t covered earlier.