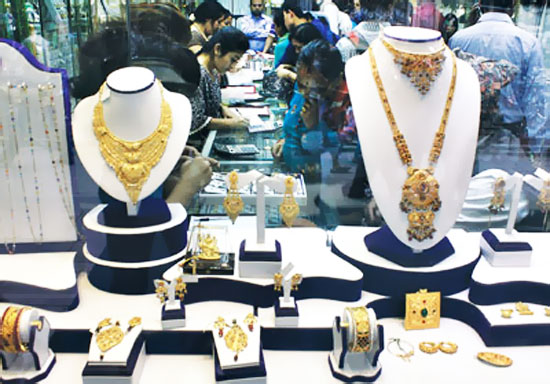 Triggered by a huge downfall in the international market, the domestice market witnessed the biggest single day drop in price of gold on Monday.

This is the biggest drop in the price witnessed by the domestic bullion market so far. Earlier in mid-November 2011, price of gold had fallen by Rs 2,155, per 10 gm, the second biggest fall in the price. It could bring a huge relief to those tying knot as people have been compelled to spend massively on gold purchases.

Gold price in the international market dropped dramatically as investors across the globe started opting to put their money on property, equity and fixed deposits. News agencies have reported that the improvement in the US economy, coupled with the Euro and Cyprus issues, has led to investors shifting from gold to equities and other investment avenues.

Reuters reported that gold dropped as much as 6.3 percent on Monday to below $1,400 per ounce for the first time since March 2011 as the market’s downward momentum gained speed after more than four months of investor selling.
According to Manik Ratna Shakya, general secretary of Federation of Nepal Gold and Silver Dealers Association (FNEGOSIDA), the current bullion price has come down to the level that was at the same period last year. The price of the precious metal had hit a record high of Rs 53,275 in September 2012.

“Due to volatility in gold price in the international market, the price has been going down continuously in the recent days,” said Shakya. “It might drop further on Tuesday but is unlikely to go down drastically as today.”
Despite massive downturn in gold price, gold traders claimed that sales dropped dramatically on Monday compared to Sunday. They said people are expecting further drop in price. “People are confused and are in wait-and-watch mode, predicting the price to go down further,” said Narendra Kumar Gupta, chairman of Shree Riddhi Siddhi Jewellers. Manish Pradhan, director of Arsi Jewellers echoed Gupta. “Compared to Sunday, our sales have fallen down significantly.”

Despite the current drop in demand, trade pundits predicted a short supply of gold in the market in the near future. “There isn’t much demand now despite the beginning of wedding season. But once the price starts to pick up after a possible further fall, the market will witness shortage of gold.” Gupta said, pointing to trends of Nepali customers who prefer buying gold when the price starts going up after a slip.

The ceiling on gold import imposed by the Nepal Rastra Bank (NRB) too is likely to contribute to the possible bullion shortage, traders said. The traders have long been demanding to increase the current quota of 15kg but the central bank has been resisting it. “The current daily import quota is insufficient even during normal days,” Shakya said.

He added that the failure of Agriculture Development Bank to supply gold in the local market on Monday would worsen the crisis, once the demand starts swelling. The bullion traders have planned to meet Finance Minister Shankar Koirala to request him to increase the quota.