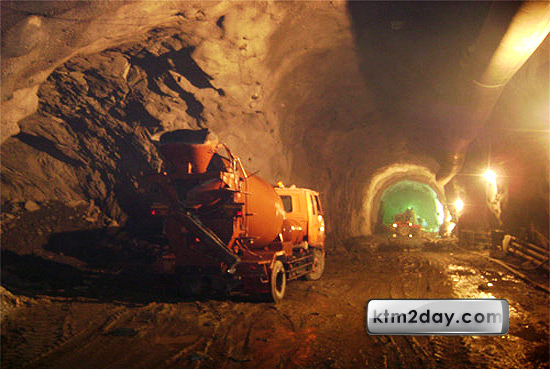 The rapid progress being made by the 456 MW Upper Tamakoshi hydropower project has encouraged the energy sector. The project did not shut down even during the Dashain holidays which has put stakeholders in a buoyant mood. Although most of the projects stopped worked during the festival, tunnelling work at the Upper Tamakoshi project continued at double speed.

According to project officials, the tunnel has been advancing at the rate of 23 m daily, however, workers dug 42 m of tunnel daily during the holidays. “During the seven days of the Dashain festival, around 213 m of tunnel was completed,” said Bimal Gurung, assistant manager of the project.

Long holidays have been one of the major reasons behind the slow progress of projects in Nepal. Earlier, construction of projects like Kali Gandaki and Chilime used to stop during festivals like Dashain and Tihar besides public holidays.
“Construction work at Upper Tamakoshi was not halted during Dashain, and it will not be stopped during Tihar either,” said Gurung. “So far, 6 km of tunnel construction has been completed, and the project is scheduled to be completed by April 2016.” The most challenging part of the project has been tunnel construction. Since progress has been moving ahead of schedule, the project will be completed on time, said officials during an interaction programme.

Gurung said that the current achievement was due to the help received from all the stakeholders including the project management, political parties and locals. Sino Hydro of China holds the contract for civil construction of the project located at Lamabagar VDC in northern Dolkha.

Earlier, the project used to maintain offices in Kathmandu and Charikot. Presently, the office is situated at the construction site and is staffed by officials with decision making powers. Project officials said that civil construction of the hydropower project was running smoothly. Meanwhile, the contract for the hydro mechanical and electrical wing has been signed.

Project officials said that they would not halt construction for even a single day. The only time work stopped was when the project ran out of fuel. Despite being a project of national importance, an incomplete organisational structure, difficulties in importing explosives and inability of the board to take decisions in time ‘have been the main challenges in project development’.