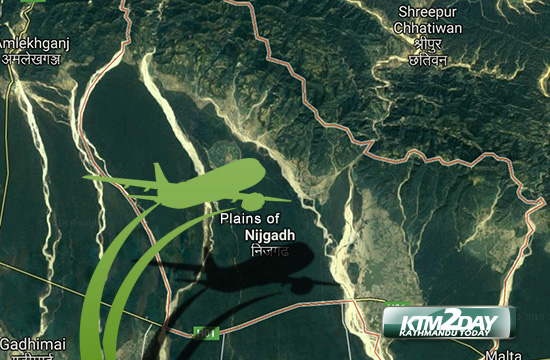 A long-planned project to build an international airport in Nijgadh has finally been set in motion with the government deciding to invite expressions of interest (EoI) from global firms to build the infrastructure.

The project will be developed under the build, own, operate and transfer (BOOT) model.

The government, however, has kept its options open to construct the airport on its own by setting up a separate company if it fails to attract foreign bidders, Tourism Minister Rabindra Adhikari told the Post. The project envisions building a modern airport in Nijgadh in Bara district, 175 km from Kathmandu in the southern plains. The hub will be the biggest in South Asia in terms of area once it is completed.

A meeting of high-level officials from the Finance Ministry, National Planning Commission, Nepal Investment Board and Civil Aviation Authority of Nepal (Caan) held on Tuesday decided to go ahead with the plan.

“It’s a major breakthrough and clears the confusion over the airport modality. Caan will be entrusted with the task of preparing the EoI document,” said Minister Adhikari. “After the EoI draft is approved by the Cabinet, Caan will invite global firms to participate in the airport development bids.” He added that the project would go ahead even if no bidders turn up.

“That’s why we have kept our options open to build the airport on our own.”

Last August, a government-formed committee presented two possible financial modalities for the construction of the international airport in Nijgadh. They are BOOT and engineering, procurement, construction and finance (EPCF). The committee recommended the EPCF modality if the government wanted to build the airport itself. It said the BOOT modality would be appropriate if foreign investment or private financing was to be involved.

Initially, Landmark Worldwide Company (LMW) of Korea had prepared a detailed feasibility study (DFS) for the project which envisaged constructing the airport under the BOOT model. It had estimated a price tag of Rs65 billion for the first phase in 2011. Five years later, in 2016, Caan estimated that the proposed airport could be constructed at a cost of Rs121 billion ($1.21 billion).

The project modality has been changing with every change in government. Successive administrations put forward opposing plans that the airport should be developed through private or public financing.

BOOT is a public-private partnership (PPP) model under which a private organisation conducts a large development project under contract with a public sector partner, such as a government agency. This model is often seen as a way to develop large public infrastructure projects with private funding. Under the EPCF model, the contracting firm makes all the arrangements including funding to build the project. According to the Korean company’s feasibility study, the airport will be able to handle 15 million passengers annually and accommodate the Airbus A380 super jumbo after the first phase of construction. Last May, the Environment Ministry approved the environmental and social impact assessment of the planned project.

More than 2.4 million small and large trees will have to be chopped down to build the swanky airport. According to Tourism Ministry officials, nearly 500,000 big and small trees will have to be felled in the first phase. In September 2017, the government formally assigned the Nepal Army to build access and perimeter roads and clear trees at the proposed construction site in Nijgadh.