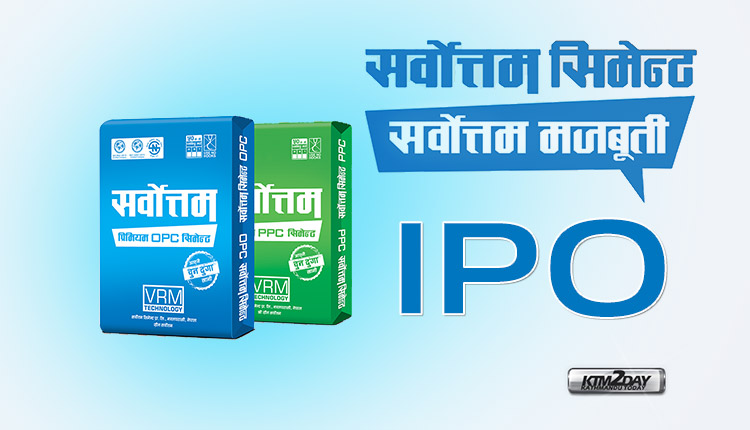 For the first time, Sarbottam Cement is going to issue 6 million IPO through the book building system.

The company will issue 15 percent of its paid-up capital, or 6 million shares, as an IPO for institutional investors, locals, employees and the general public.

The company, which is going to issue IPO through book building for the first time, has stated that the share price of the IPO will be at least Rs 750 per share. Based on the internal valuation of the company, the minimum share price is estimated to be Rs 750. It has been stated that it can be further increased through the bidding method by the institutional qualified investors. Investors are required to apply for a minimum of 60 shares in the company’s IPO. The company’s IPO issuer is Global IME Capital Limited, with co-issue managers as NIBL ​​ACE Capital and Prabhu Capital.

After issuing the IPO, the company is expected to pay 35 percent dividend to the investors by giving 10 percent bonus share and 25 percent cash dividend.

The company appears to be better than average for investors as it received an IPO rating of BBB Plus from ICRA.

Also, according to the ICRA rating, the company’s limestone and transportation costs are lower than other cement industries, so the company can claim higher returns.

A Distinctive cement manufacturer in Nepal, ISO 9001 and ISO 14001 Certified, Sarbottam Cement is exceptional in not just one but many ways. A sister concern of Saurabh group, we are the first European Plant Technology in Nepal with Vertial Roller Mill (VRM), the most advanced German Technology that produces very fine Blaine of cement, measuring up to 4500 Blaine.
This innovative technology allows us to save up to 50% in energy consumption, thereby drastically reducing our carbon footprint. In this regard, we are the only Nepalese cement manufacturer able to produce eco-friendly or “green” cement.
Share