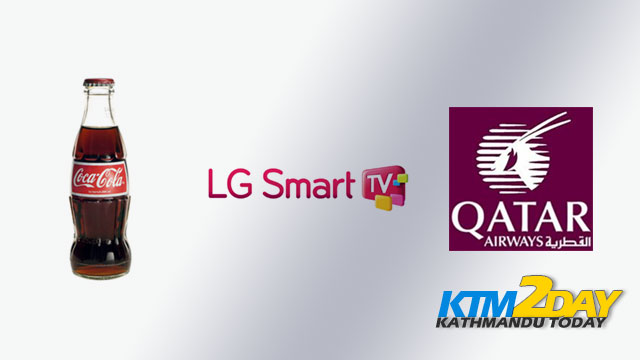 KATHMANDU: Coca-Cola on Tuesday saw off four lucky winners of ‘Chance to Fly to Brazil Under-the-Crown’ campaign to watch World Cup football. The lucky winners, Shankar Poudel of Pokhara, Tek Bahadur Malla of Kathmandu, Tanka BahadurPandey of Kathmandu and DilliRai of Jhapa, will each watch a FIFA World Cup quarter-final match in Brazil. “The Coca-Cola ‘Chance to Fly to Brazil’ Campaign was launched to provide the people of Nepal with the once in a lifetime opportunity to combine their passion for football and Coca-Cola. We are very happy that we are able to bring small moments of footballing happiness to the people of Nepal,” said Alok Kohli, country manager, Coca-Cola Nepal and Bhutan. More than 1,000 consumers won 2,500 exclusive Coca-Cola merchandise and refreshing Coca-Cola products through weekly lucky draws for 45 days, the company said in a statement. “We are overwhelmed with the response. We thank each and everyone who was part of it,” said Salman Latif Rawn, managing director of Bottlers Nepal. As part of the campaign, Coca-Cola had also brought FIFA World Cup trophy to Nepal in December 2013. (PR)
LG 39-inch LED TV huge success

KATHMANDU: A new LG 39-inch LED TV, launched especially for the FIFA World Cup, is witnessing a huge demand in the market, according to CG Electronics. “It delivers full HD resolution picture quality and exceptional sound adding for excitement to the football fever,” the company said in a statement. “It is equipped with a USB port and two HDMI ports which allows direct access to favourite movies and files.” CG has offered a heavy discount on the model, slashing the price to Rs 65,990 from the earlier Rs 81,000. “Besides the discount, the consumers get a free DVD player worth Rs 5,000 and a 2-year warranty during the World Cup Period on the purchase of the TV.” it read. (PR)
30pc off on Qatar Airways London flight

KATHMANDU: Qatar Airways is offering up to 30 percent off on Business Class fares to London from Kathmandu on select fights. A generous travel period offers passengers added flexibility, giving customers that purchase tickets from July 1, 2014 to July 23, 2014 and complete their travel from July 3, 2014 until July 23, 2104. The national carrier of Qatar has seen a rapid growth in just 17 years of operation to the point where it is flying a modern fleet of 134 aircraft to 143 key business and leisure destinations across Europe, the Middle East, Africa, Asia Pacific, North America and South America. Over the next few months, the network will grow further with new routes to Dallas/Fort Worth, USA (July 1, 2014) and Djibouti. (PR)